pencil-topics.co.uk
All about coloured pencils

The Grid method and other drawing techniques

You may have heard of the grid method of getting an outline down on your drawing paper. If you are not confident in your freehand skills but don't want to trace it is perhaps a half way house way of starting off a coloured pencil drawing. However, it isn't the only option available to you.

Lets look at a selection of methods we can use, some of which may be familiar to you.

This is quick and flexible, but prone to distortion and the need for lots of correction. It is best attempted by those who are very comfortable with their drawing skills.

Projects like the Venice Rialto Fish Market present problems when freehanding due to the widths of the buildings and perspective issues.

If you are drawing animal or human portraits it is essential that the features are positioned correctly as having one eye lower than the other can throw out the resemblance completely. Drawing freehand can introduce many such errors which are not necessarily picked up until further through the process of the picture.

This is a well known way to ensure that things are placed in the correct positions when laying down your initial drawing. It is often used when working from a photograph, but not so much when drawing from life.

It involves some setting up before you actually get to doing the drawing itself.

First you need to print your reference photo (or scan and then print if your photo is non-digital). Then you need to decide on a grid size. Depending on the size of your reference and the complexity of the design you might choose 1 inch squares (2.5cm) or even reduce that by one half. You want the lines of the design to cross the grid lines at enough places to make it easier to reproduce on your drawing paper.

If you want your drawing to be exactly the same size as the printed reference, you then also draw the same size grid on your drawing paper. However, if you want to enlarge the picture then you need to decide on how much bigger you want it to end up. To double it, you will need to draw your grid so that the squares are twice the size of those on your reference.

Try to draw the grid lines lightly, without scoring lines in your paper that will show in the finished drawing.

If you have a lightpad you can reduce the time spent on this, by using a thin sheet of cartridge paper on which to draw your grid with a black fineliner pen. You would then lay this on the lightpad with your drawing paper over the top. When you turn on the power you should be able to see the grid lines through your paper. Sadly this won't work with all drawing surfaces, for example pastelmat. The grid sheet can then be reused for further drawings without the bother of drawing it out each time.

Likewise, if you don't want to draw the grid on the photo each time, you might like to invest in a piece of thin plastic or an overhead transparency film on which to draw it. This can then be laid over the top of the photograph.

If you use either of the above timesavers be sure to attach the grid sheet to the paper or photo so that they do not move whilst drawing.

You then draw square by square, marking the points where each object in the photo crosses a line of the grid. Carefully join those marks together with straight or curved lines as appropriate to reproduce the shapes on your paper. In particularly tricky areas you might like to draw in lines to create smaller squares.

Once your drawing is on the paper you need to erase the grid lines carefully.

Many people draw from photos on their ipads or tablets nowadays. There are apps available that will create a grid automatically for you, which can then be moved until they line up where you want them to lay. This reduces the need to draw one set of grid lines.

This is similar to the grid method, however guidelines are drawn from a centre point, like the rays of the sun. You would take your first lines from corner to corner and the second set vertical and horizontal through the plotted centre point. Further lines are plotted as needed and then the details are transferred across area by area. The flag still needs to be erased afterwards. I know a number of artists who use this method, but I could never see any advantage over the traditional grid method.

I mentioned the use of a light pad or box earlier, when discussing the grid method. If your photo is clear enough and your drawing paper translucent enough you could place the image directly on the light surface with the paper on top, then trace the shapes with reasonable accuracy. Again tape both layers together temporarily so they do not move in relation to each other.

A cheaper alternative to this is the old fashioned method of taping your two layers to a brightly lit window, but of course you would need sunlight to do this successfully. It can also be tiring to the arm to draw vertically.

Projection is an alternative but takes practice. Firstly you need to work in a darkened room which is not always possible. I  found that my drawing hand obscured the projected image and the whole business got very complicated, resulting in an aching hand and arm. I sold the projector!

Another very ancient method is to use a Camera Lucida. Originally these involved the use of a prism through which light passed but the modern versions tend to use a mirror set at an angle. Positioned correctly you should be able to see both the original image and a ghosted reflection on your drawing paper. This can then be 'traced' onto the paper. However, again, it can be tricky to keep your drawing hand from obscuring the reflection.

I tried out a Camera Lucida app on the iPad, which actually worked quite well, within the caveat mentioned above, but it is important to keep the device steady in one position which really needed a stand of some kind which I did not have available. It might be something you would like to look into though.

A simple system that depends on using thin tracing paper to carry a copy of the image across. I find tracing invaluable for taking a final copy of the sketch drawing as a record to go back to should things go astray with the artwork.

There are variations of the system.

One is to apply an even layer of graphite or soft colour pencil (or even pastel pencil) to the back of the trace and then re-draw over the top to press the image into the working paper below. However, too much pressure can result in an indented line in the working paper which can cause problems later when dry colour is worked over the top of the indent.

An alternative to this is to redraw the reversed image on the back of the tracing paper using a pastel pencil or very soft watercolour pencil. We then fix the trace on top of the working surface and apply a 'bone folder' or the back of a spoon handle etc to pressure the line under the trace on to your drawing paper. You may find you need to practice this technique, but it works well and many of my students use this method. It does not produce an indented line.

You do need a soft but sharp pencil line to transfer well. This system also has the advantage that if you are working a watercolour pencil picture, the line disappears into your picture and doesn't need erasing if you use the same medium for the trace.

This method relies on measurement and angles. You may find it quicker than the grid method.

The reference should be either the same size as your worked picture or a simple arithmetic variation (twice the size - half the size etc). You draw a frame of the correct size on your working surface. Then measure a point where a main feature crosses the reference frame and make a suitable mark on your working frame. By measuring angles and distances you can transfer enough detail across to enable you to do a satisfactory freehand drawing between the plotted points. 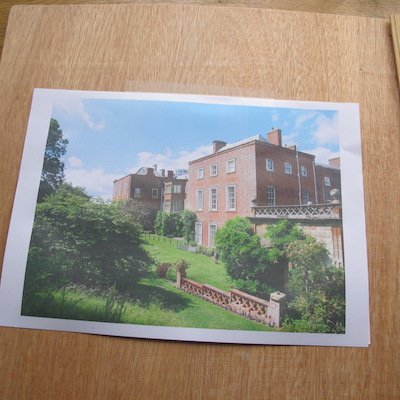 This is much easier to demonstrate than to explain! This is a quick method to use where you will be wanting to do most of the drawing yourself and simply want a guide to the overall position of important points to get sizes and angles correct. 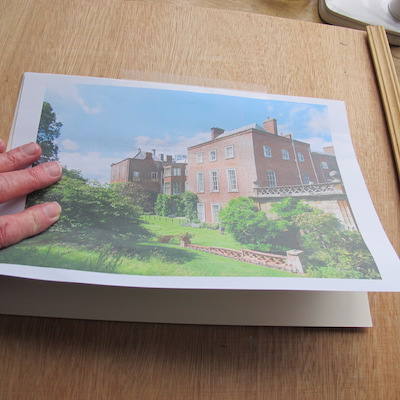 The reference should be printed out on fairly thin paper (we are not worried about quality - merely position of the points in the picture). Tracing paper works well for this but so long as the paper is thin enough to see through against the light, the system will work. 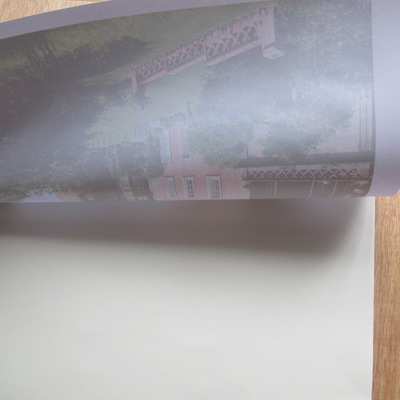 With the reference positioned over the drawing paper and the light coming from in front of me, I can see the image through the paper when it is folded over. This is printed on 90 gsm copy paper. 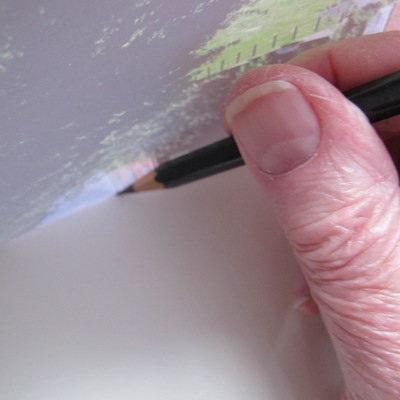 If I fold the paper over close to the point I want to plot, I can match the image through from the reference and make a mark on my drawing paper. 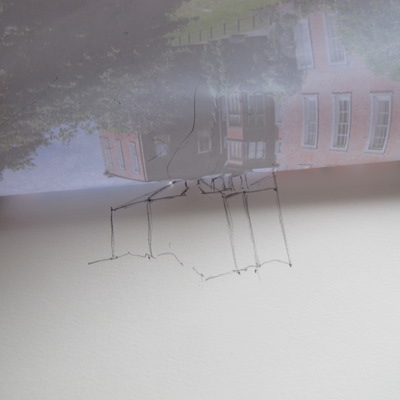 By taking a succession of points, I can quickly mark out the overall shape of the essential parts of the picture and then fill in the detail direct from the reference later.

The advantage over tracing is that it is one step process and no line indentation (so long as you are careful when drawing your points) it does mangle the reference a bit, but not so that it is impossible to use afterwards. 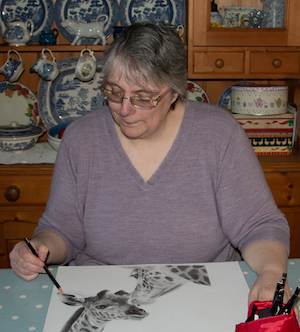