By high contrast drawing, I am not referring to graphic images that only contain black and white elements. These are perhaps better created with markers rather than coloured pencils.

However, rendering light and shadow is essential to drawing realistic pictures. If you omit the darkest shadows and lightest highlights your drawing will look flat and two-dimensional. This is an issue many beginner artists struggle with.

In particular, beginners are often hesitant when including dark areas in their work. Perhaps the most common reason is a lack of confidence in an accurate outline and therefore the possible need to erase later.

Normally those just learning to draw will pick a white paper to work on, thinking the surface itself will provide the lightest value in their artwork. However, areas without any pigment will stand out like a sore thumb! Why?

A common mistake is to assume that white objects reflect all light equally. This is not the case at all; both texture, shape and other things in the vicinity need to be kept in mind.

A flat, smooth, shiny object will reflect light and appear white at first glance unless it curves away from the light source or something nearby causes a colour cast on it. 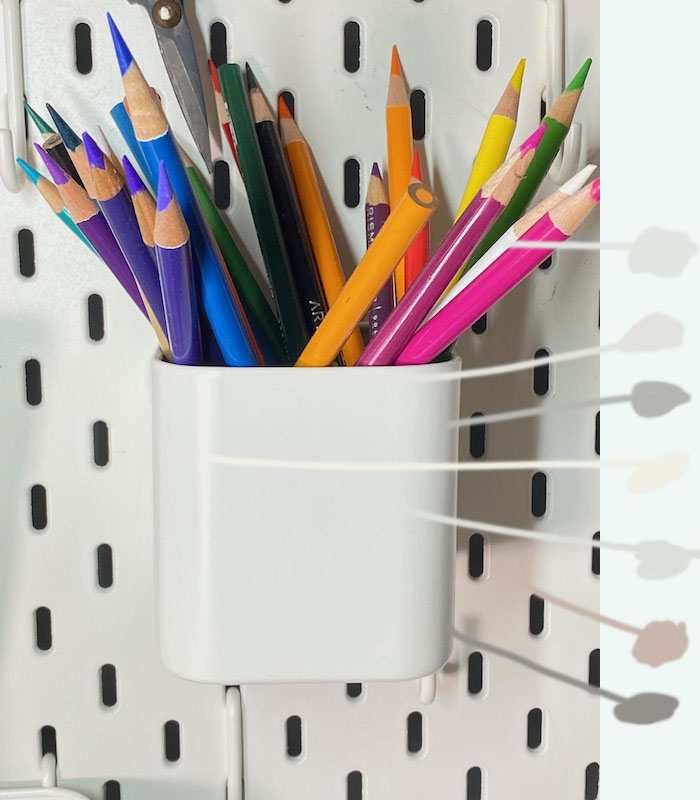 In the photograph above the smooth but curved surface of the pencil pot appears white, at least where the highlight is visible. But no, when I use the eyedropper tool in Photoshop it is displaying a slightly peachy tone.

The other spots on the right-hand side show the colour picked up from other areas. None of them are pure white, not even the white paint on the barrel of the white pencil! The bright pink pencil is creating a pinky cast to areas on the right. 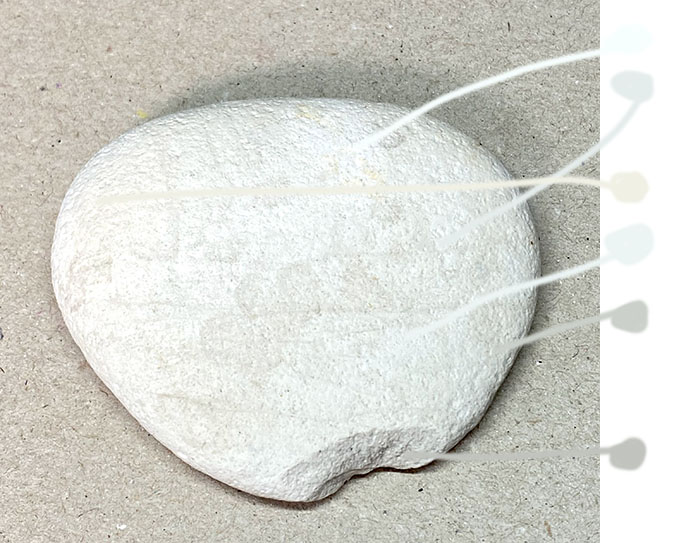 This stone appeared pure white when I picked it up from the beach. However, areas that to the naked eye appear white actually have a cool bluish hue. The shadowed areas in the texture are a warm grey, and the left-hand edge where it curves is picking up a warm yellowy hue.

I sampled multiple extra areas but could not find a single one that was pure white!

Therefore, a white paper alone may not provide a realistic representation of light values. Add this to the lack of bravery in adding dark areas and we have a problem when trying to create a  high contrast drawing.

This lack of contrast affects the artwork's overall appearance; especially a drawing's depth or "volume", its sense of real three-dimensionality.

A drawing consisting of only mid-tones will appear bland and uninteresting.

Let me illustrate the difference between a drawing that is all the same value and a high contrast drawing.

The first drawing is a cat I drew from a photograph obtained from Pixabay. At first sight it appears to have a wide range of values. There is black in the eyes and white in the whiskers - or is there?

I took the drawing into Photoshop and used the eye dropper tool to sample the "black" in the pupil. I used that selected colour to draw a blob on the left-hand side. I then picked up pure black from the palette and drew another blob beside the first. See the difference? What you thought was black was really a darkish grey. Therefore we are missing the darkest darks from the value range. 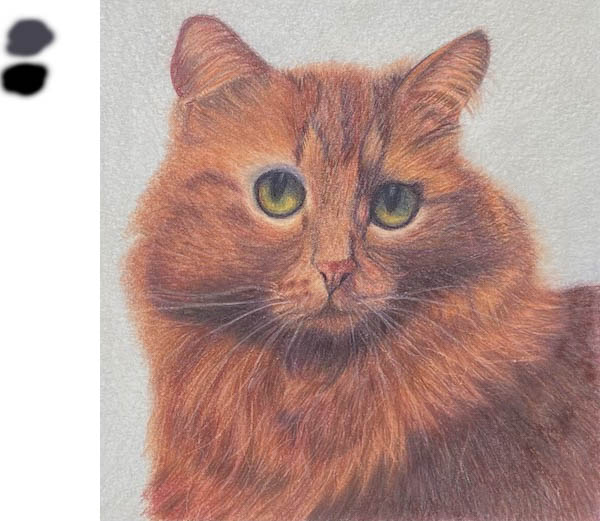 Next, I edited the photograph to give a fuller range of values (there is actually no white in this image). Can you see how the high contrast version below, grabs the eye, making the previous version appear washed out?

In my defence, I was sick with Covid when I drew the original picture. 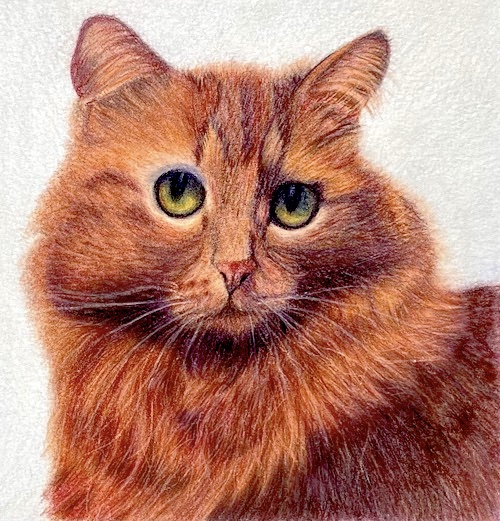 I suggest two ways around this problem.

A toned paper will allow you to ensure your lights are lighter than mid-tone and your darks are actually dark enough.

Look for your darkest areas and get them in early. You can then compare other values against these to help you get a better idea of how dark to go. It's often darker than you thought!

The eye naturally goes to the point in the picture where the lightest light meets the darkest dark. An accomplished artist will place this contrast at the focal point of their image. The viewer's eye will start there and then be drawn naturally through the rest of the picture.

Beginners tend to place their focal point in the centre of the drawing and this makes for an uninteresting composition. It's much more interesting if the focal point is nearer the edge of the picture, if possible according to the Golden Section.

Light falling on an object also indicates the type of surface.

Think of the way light would play over the delicate surface of a child's skin compared to the wrinkles of an older person's face.

It is all down to light and shadow, more than colour. Get your values right and it doesn't matter WHAT colour you use. A high contrast drawing will still read as realistic even if your fox has green fur, instead of chestnut!

Strong sunlight will enhance the texture of a surface. This gives our eyes clues to how it would feel to run our hands over the object. High contrast drawings succeed in giving us these visual clues.

It can be very tricky turning a dull day on your reference into a sunny day in your picture, as inventing shadows is not a task for the unskilled.  As one who has done several night scenes, into which I have inserted people, I can assure you that working out shadows from multiple light sources is a real headache.

On the subject of shadows, be careful to make them cooler in colour than the lit areas alongside. Don't just add black or grey. Go for purples, blues and complementary colours to show the lack of light.

As well as the surface texture of an item, strong contrasting light will also give our eyes an indication of its form.

Let's take a simple example. Here we have a circle.

How about if we fill it in. Is it now a convincing ball?

This is progress! We have moved on to what could be a solid shape. BUT It is clearly not a ball …. perhaps just a solid disc of some sort? 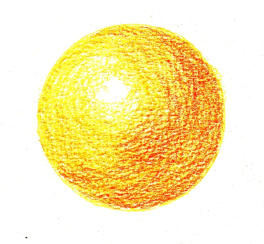 Fair enough - I am sure you get the point.This is more like a ball, but it could be a round floating balloon.

This is a much more convincing sketch.

Not only does the highlight and the grading of the colour show us the rounded shape, the shadow shows us that it has solidity and is not floating. 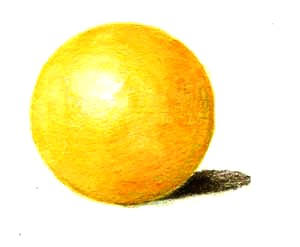 BUT we have another point we can see from this illustration. The 'ball' without a shadow has quite a roughened surface, which we have obtained by using two colours on a fairly rough paper. The first colour, yellow, has covered the surface apart from the highlight where we have used white.  This tells us that the shape is in direct light which is coming from the upper lefthand side. The second layer of colour on top skips over the paper tooth and tells us that the shape has a rough texture, reminiscent of an orange.

We used watercolour pencils for this rough-looking shape, giving us the opportunity to then take a damp brush and manipulate the pigment on the paper. After doing so the object now looks smooth. By adding a shadow we know it is resting on a surface and the position of that shadow gives the same message as the white highlight, as to where the light is coming from.

The result of our efforts is to portray a rounded yellow ball in a lit situation. The way that the light has been shown gives solidity to the shape.

When someone views a high contrast drawing they really feel as if they could reach out and touch the subject. The images also give you an unmistakable sense of place and atmosphere. All it takes is experimenting with drawing light sources and paying attention to your values with shading.