When the tip of a coloured pencil moves across a piece of paper it deposits pigment. Artists call this mark making.

These marks can vary immensely, from a tiny dot to a long flowing line. They can be made with care, or described as a scribble.

Our materials can also influence the results... For example, the pressure put upon the pencil point can transfer more or less pigment onto the paper. The sharpness of the pencil tip will have an effect as will the paper that is used.Using a soft or hard cored pencil will create variations

Perhaps the most important thing is to be aware of the marks we make. We can then make considered choices, so that they help to represent the texture of the objects we are drawing.

The samples below were prepared on a slightly ribbed cartridge paper, using a soft, waxy Prismacolor Premier pencil. A harder pencil would have left finer lines and more precise shading, however the colour would have been less intense.

The names given to these examples are not "official", they are merely a means of labelling each one. 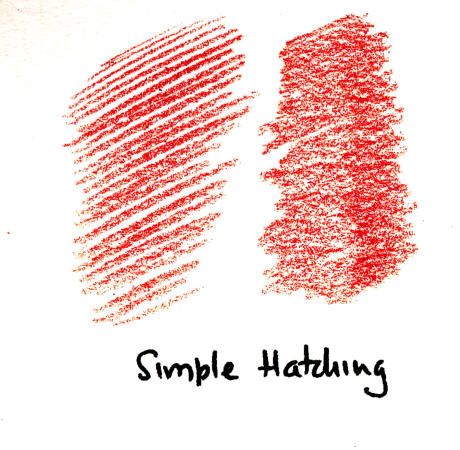 Firstly we have simple hatching where the mark is made by a series of lines, all made in the same direction and close together. You can see that by pressing harder, or going back over with a second layer, it is easy to show a darker area. 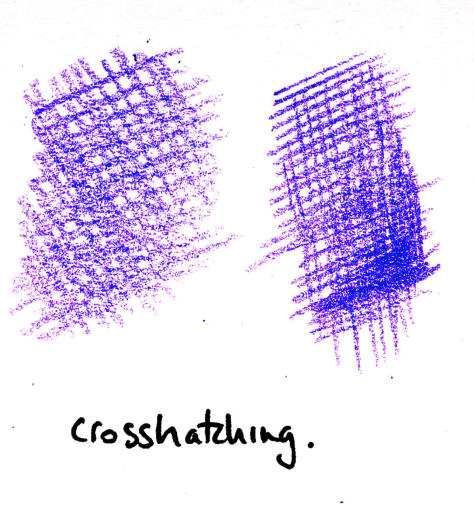 By applying a second layer of lines, at right angles to the first, we get cross hatching. This can be useful to help reduce the obvious directional shading achieved with simple hatching.

When using a new colour for each layer, an optical blending occurs, where the eye is deceived into thinking a third colour has been used. 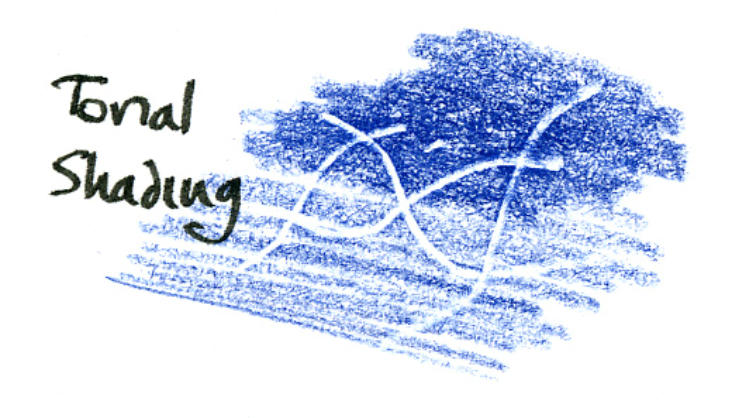 Moving the pencil back and forwards, without lifting the point from the paper whilst trying to avoid any overlap, creates tonal shading. To make some areas darker, more pressure is used.

Often the side of the pencil point is used rather than the tip. giving a wider line and making it easier to avoid gaps between the marks. It can also be used over impressed lines as the tip will not enter those indentations, leaving them visible.

This is probably the most used method of mark making with coloured pencils. 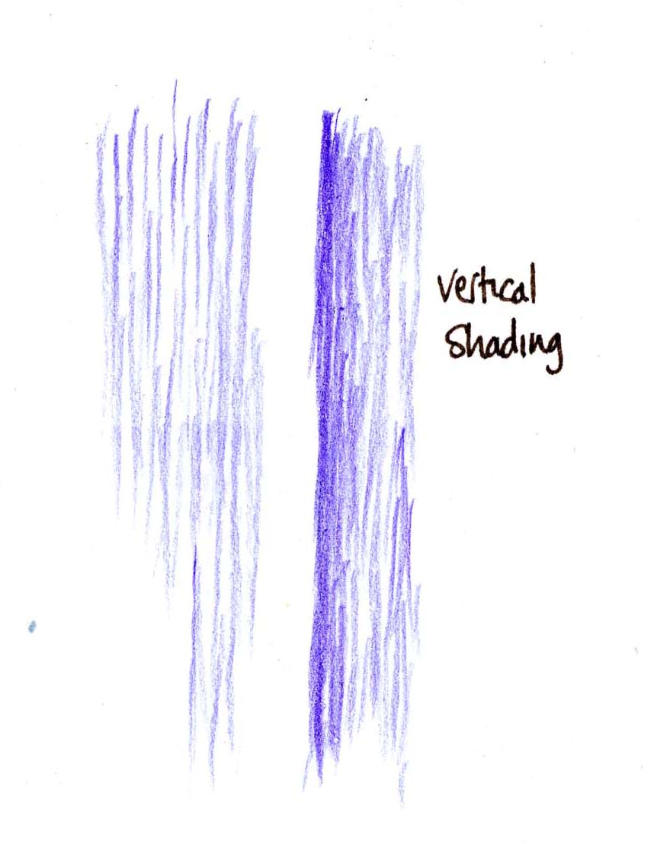 Vertical, or linear, shading is another version of hatching.

Here all your strokes go in the same direction, but do not necessarily have to lay snug against each other. Nor do they need to start and stop in the same place, in fact they will look more natural if they don't. The marks can overlap or be spaced at random distances apart. If they overlap, or you use more pressure, you can get a darker effect.

Although this type of mark making is done by moving your hand down towards your body, you can vary the position of your paper. This makes it ideal for both tree trunks and water in a landscape. 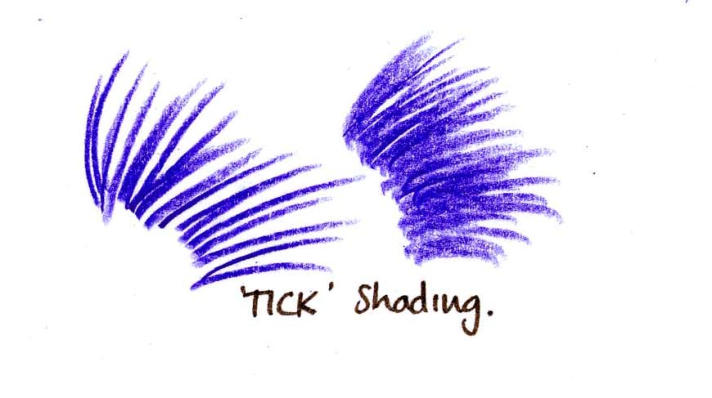 Peter uses this term to denote marks that comprise a single stroke where you press firmly to begin with and gradually lift the tip of the pencil off the surface by the time you reach the end. The stroke will change from dark to light, and broad to fine as it progresses.

Carol uses this for fur on her animal portraits, and it is also good for hair on humans. Peter makes use of it for grass and bushes in his landscapes. 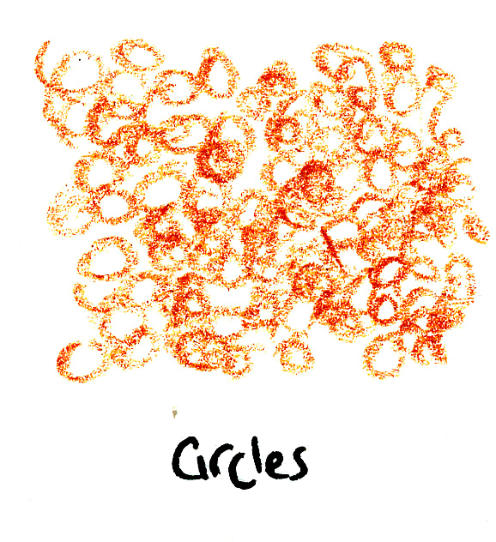 In this technique the pencil forms a series of circles or ovals, of varying sizes, overlapping to a degree each time.

When using a single colour you can achieve an even coverage with no obvious direction lines.

By loosing up a little on the first layer, you can add successive colours to create a broken network of tones which work well to represent leaves on a tree, or curly fur on a poodle. 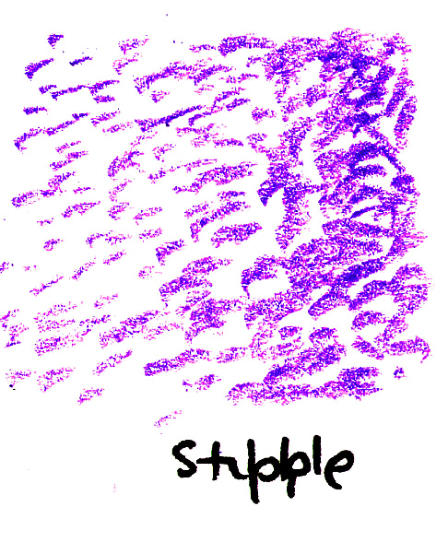 Here short marks of a random nature are placed within the boundary of an area. When massed together they give the impression of a rough surface, such as stone or gravel. Multiple passes, each with a different colour or value heighten this effect. 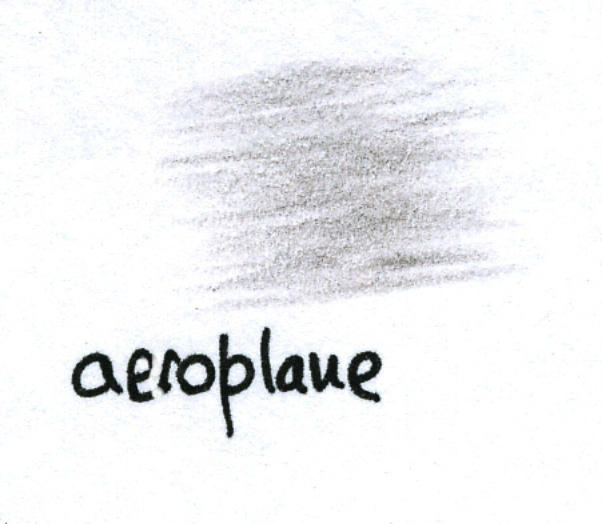 Peter's name for this technique is descriptive. Imagine a plane coming in to land and then taking off into the sky again immediately without stopping to let off the passengers.

This is ideal when your strokes need to fill a large area without any obvious "banding" or overlaps that appear darker in value. It is also useful when you wish to give the illusion of a shadow or highlight on a surface, especially long hair. 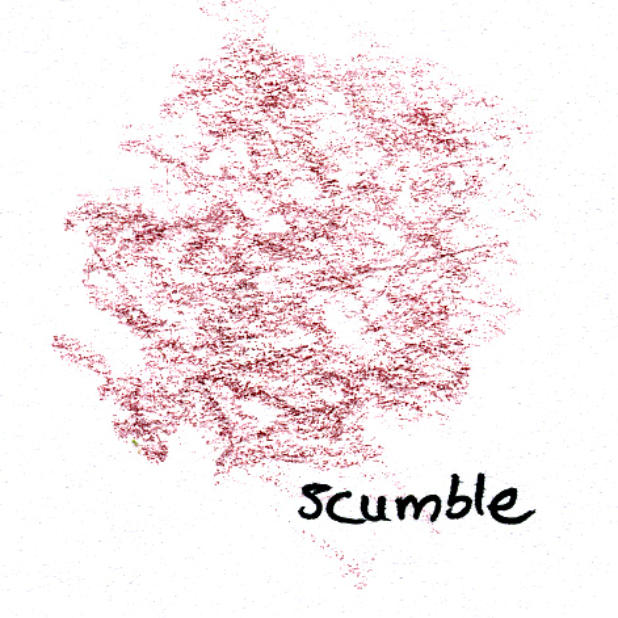 Finally, we look at what could be called scribbling. The pencil is taken in any way you wish and then backtracked, then off in a different direction, sometimes around in circles, sometimes in a straight line for a bit. It makes working up to an edge or join between sections simple when required.

A bit of imagination and you can make this form of mark making represent whatever texture you desire.

Hopefully this introduction to mark making has given you some ideas and suggestions for your own projects. Perhaps you will combine them to come up with your own strokes, and give them your own names.