Peter Weatherill had the opportunity to test the Mitsubishi Uni coloured pencils from Japan, while teaching at a workshop. At the time they had only just started to be marketed in the UK, but are now available over the Internet. 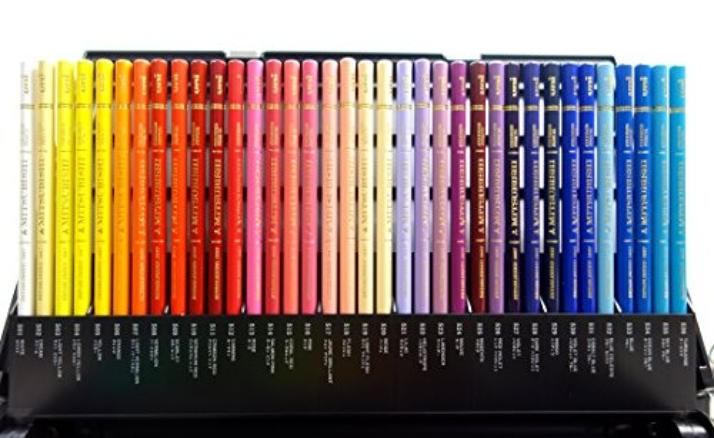 The pencils are described as wax based and came in a presentation box of pencils which opened up to display the contents in a unique way. They are numbered and named for colour and the box has named slots for the pencils to be stored in so that they stay in order. First impressions were good. It was only when you started to examine the box and pencils closely that questions arose. 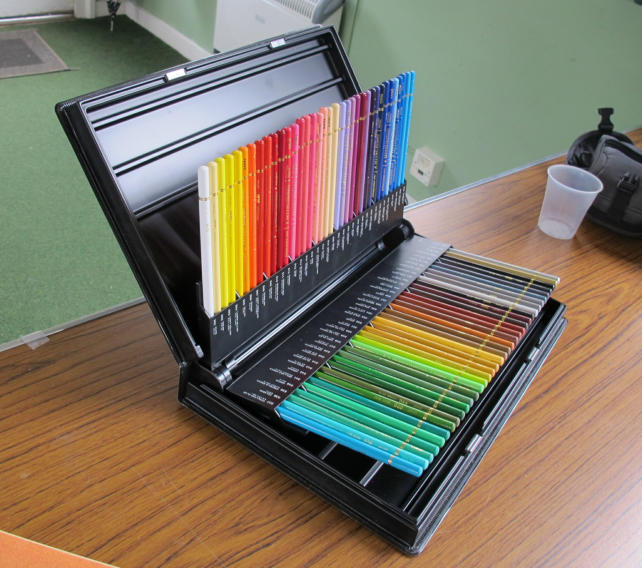 The 72 pencil set in the open presentation box

There is no lightfast indication and the company are reported as saying that they have not done any testing and have no plans to do so.

Single pencils are not easily available to replace used ones.

I understand that they are available at relatively low cost in the USA and Australia.

So how do they perform?

Peter carried out a brand test comparing them with Derwent Coloursoft (another wax pencil), Faber Castell Polychromos (oil based but 120 colours) and Art Spectrum (low priced, wax based with 120 colours).

His thinking for this was to compare the Uni pencils with another low cost brand ( Spectrum), a wax based brand he knew well (Derwent), and an Internationally available brand with a similar large range of 120 colours (Polychromos).

The Uni pencils are harder than the Spectrum, and similar in hardness to the Polychromos.  Coloursoft are the softest.

Mitsubishi Uni pencils layer in a similar way to Polychromos and the white will provide an efficient barrier on plain paper to reduce the intensity of colour laid on top.

They appear to be a good working pencil though the lack of light testing and no single pencil replacements make them a poor choice for regular use.

They appear to be marketed as a presentation set suitable for children (The Mitsubishi promotional material indicates this). We have not examined the colour selection or done a detailed comparison with other brands as we do not feel that these pencils would make a sensible purchase for someone wanting to take up coloured pencil art seriously.

It is possible that there may be individual colours that are unique and would be of use to a botanical artist, but the lack of a lightfast rating would suggest caution.  The lack of single replacement pencils suggests looking elsewhere.

The box appears to be a win for Presentation over Practicality.