Drawing reflections in water at first may seem deceptively simple. But consider how the eye sees a reflection.

The reflected image appears to lie below the water surface, yet it is in fact an exact mirror image of the scene in front of you.

Everything above the water is reflected exactly in the corresponding position below the water surface, just like a mirror. Easy to paint! Just copy what is above...

Keep in mind the following...

Both of these will have an effect on what the eye sees as a reflection.

Let's first simplify the problem and see if we can make the principle easier to follow with the help of the illustration below... 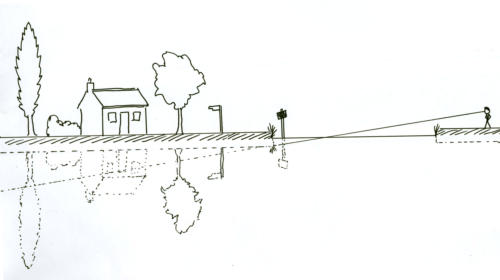 The eye looks into the water and sees the post , the river bank, the signpost, the trees and the house (and the bush behind the house)......  But does it?

Our little man is standing at A and he looks into the water.  He sees the reflections of the scene on the other side of the water. 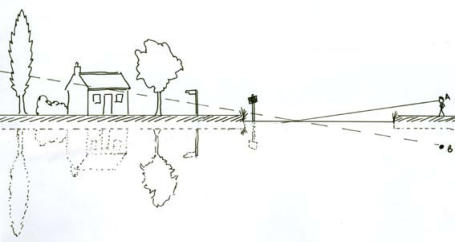 Effectively  we can also think of him as standing with his eye at position B  looking up at the scene through the water,  but he only sees part of the more distant elements that are otherwise shielded by the river bank.

He sees the whole of the post in the water and the river bank -  as that is immediately in front of him, but he sees only the top of the signpost, the foliage of the first tree trunk, the roof of the house, nothing of the bush behind the house and only the top half of the poplar tree.

If you don’t believe me, look at the photos below. 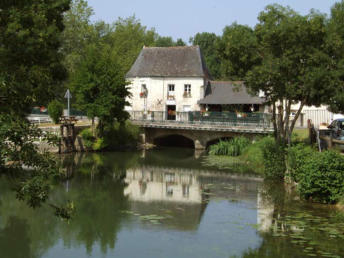 The first scene is in the Loire Region of France, consider the following points: 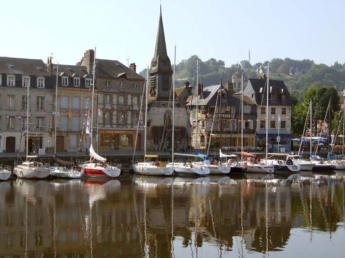 Now look at the photo of the Harbour at Honfleur.

Lighter elements of the subject are usually darker in the reflection, and darker elements appear slightly lighter....  the reflected image loses some of the extreme lights and darks. 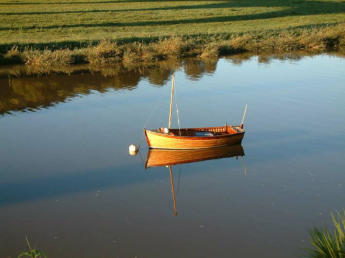 In ‘Tamar Moorings’, the reflection shows as darker, even though in the strong sunlight every plank is visible.  The point here to observe, though, is how we see the inside of the boat in direct view, but the reflection sees the boat from ‘under water’ and no interior.

As with painting all reflections, the need is to look and to paint what you actually see, not what you think you see. 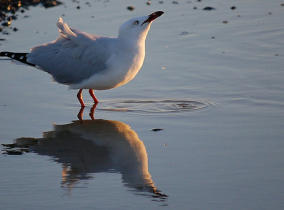 I will show you another couple of examples that may make it clearer and might even surprise you. First is a photo of a gull.

Look how your eye sees the underside of the gull when viewed as a reflection, and the reflected sunlight on the underneath of its body is darker and more golden as you are seeing more reflected sunshine on the other side of the body. 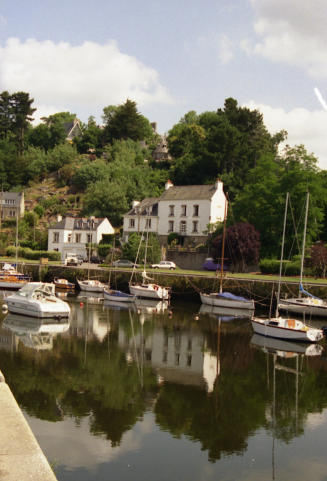 Now look at this photo of the old port at Pont Aven in Southern Brittany.

Firstly the scene as the eye normally sees it.  Look at the reflections of the boats.... Nothing surprising to see.

The second picture is the same one with the image turned over so that the reflection is at the top. 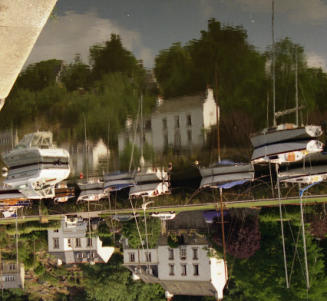 Now look at the top half of the lower picture again ( the reflection in the original picture ).

The boats are floating above you.

That is because the reflected image is NOT the same as the direct image, but one seen from a different viewpoint.

Instead of looking down , we are now looking up.

There are exceptions, however

The closer the eye gets to the surface of the water, the more alike are the original and the reflection.

The higher the eye line above the water, the more extreme are the differences between the original and the reflected view, until even quite high mountains disappear and the only thing reflected is the sky.

Check out the page on drawing a boat which also covers how ripples on the water surface interfere with reflections.