Let's watch an aquarelle background take shape, step by step. Using watercolour pencils in this manner allows us to achieve smooth backgrounds to our artwork simply and quickly.

These are not so easy when working only with dry coloured pencil points, although we describe some techniques for doing this on this other pages of the site, such as using powdered pencil pigment or utilising a pad of felt to rub colour into the surface of the paper from a similar "paper palette' as used in the following demonstration.

You can produce a picture entirely with watercolour pencils (aquarelles) as illustrated in this mini tutorial. Or you can create the background in this way and then complete your project using dry coloured pencil on top.

Peter "invented" this picture entirely from his head and did not use a reference photo. He worked out the composition at the same time as the painting (at the end you will see why that may not have been a great idea).

I will let Peter tell the story in his own words.

Peter started this project at one of his Knuston Hall workshops where the question of how to work an aquarelle background was being discussed. Peter had some stretched paper to hand, so he set out to show how he mixed and developed the colours.

He took photos while working on this short demo, and explains how he took the picture further after the class.

For this project I started with ...

(This is an affiliate link, using it will help to keep the site online as I earn a little commission without it costing you extra).

The first step was to moisten the individual areas of pigment laid on the rough paper to make them able to be lifted with the brush and then added to the bowls of water to make VERY thin pale washes of colour. It is wise to make up much more than you think you will need ... you will use very little pencil pigment and it is easier to make up too much than to duplicate a colour later. 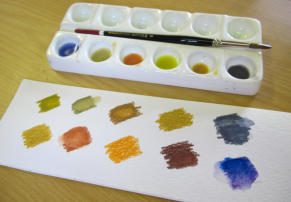 The 'palette' of aquarelle pigments

I lay the layers of colour wash down on to dampened, stretched paper so that colour flows smoothly over the paper surface. The actual colour is very thin and it can take several layers of colour to make an impression. Remember that watercolour goes on to the paper darker than it will show when dry.

I painted in some hills with no forward planning. The white area of unpainted paper could turn into a road or stream as the picture progresses. For the sky I started with two layers of very pale blue from an ultramarine source (i.e. a darker purplish blue). 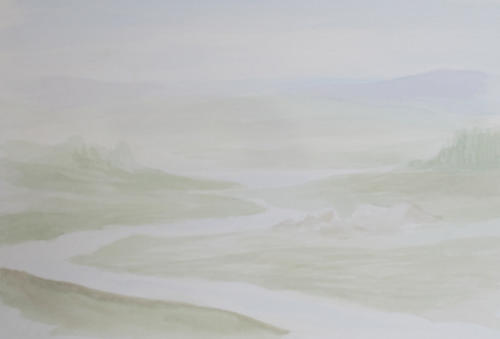 The initial pale washes of colour

I tried to crop into the photo to give you a detailed shot, but I am afraid the quality isn't very good. As you can see, the layers of colour may be thin, but each layer adds to the previous ones giving total control of the graded colour. 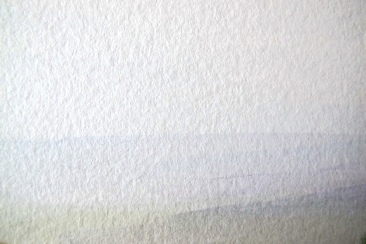 It may help to see another scaled up portion of the washes which has been colour adjusted from the original photo so that you can see what is going on. 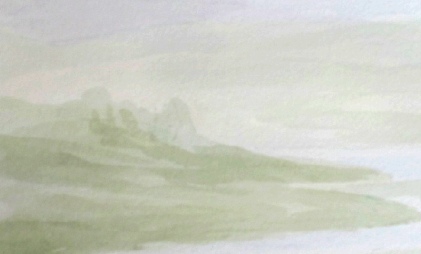 I have now taken the colour washes on a stage and made those left hand hills into more definite mountains. There is also a darker line of nearer hills on the right.

This is a case of decision making as we go along. Next I added some shadow along the road/stream edge. I'm still not sure what the overall subject will be, at this stage. What might have been just general hillsides will now take on a Scottish air and have more golden colours in the foreground. 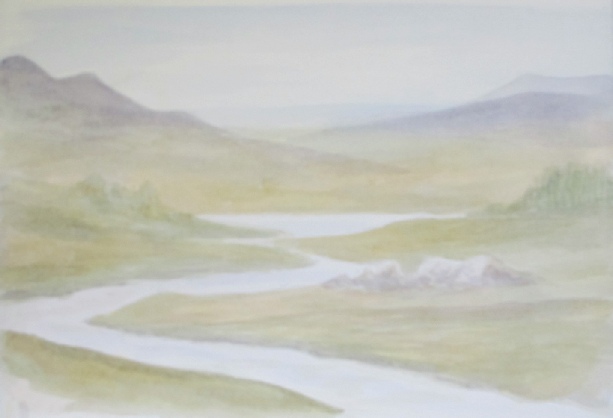 I have added further washes of ochre shades to the green. I then put away the wash brush and the bowls of thin colour and looked afresh at the picture to decide where to go next.

You'll see that I have drawn in some Highland cattle on the right and also added some trees in the middle distance. I applied some darker shading to the left-hand side high ground in the distance, which will give a focal point of dark against the light of the sky.

I have now decided that the road in the foreground will have more ‘life’ if it is a stream. It may well become narrower as the picture progresses, but we will see.

All the later colour additions after the ochre washes are still dry watercolour pencil shading. 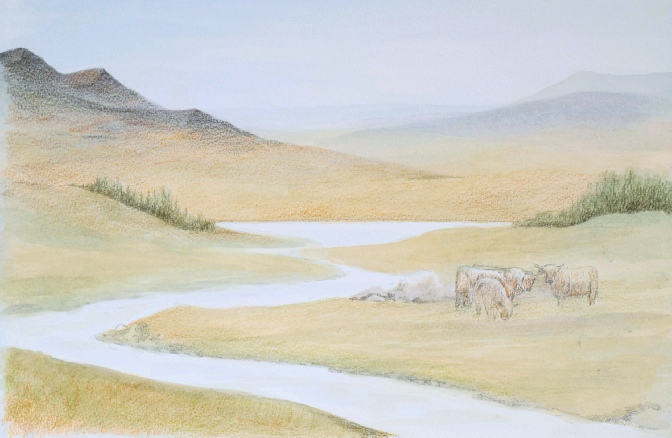 Adding Highland cattle into the scene

I applied a damp brush to those areas of dry pencil, so the colours have increased in strength.

Then I added further layers of green shading to the areas where the cattle are grazing, as well as in the distant lower ground. However, I think that is a mistake. I will correct this as soon as I decide on the next action.

Building up the colours

I spent some time thinking about where to take this exercise, then added some trees on either side.

Not a good idea!

The additions obscured the delicate hills on the right and changed the whole balance of the picture. I corrected this and finally abandoned the picture!

It serves the original purpose, though, in showing the use of underpainting to create an aquarelle background.

The disaster in composition was of my making! 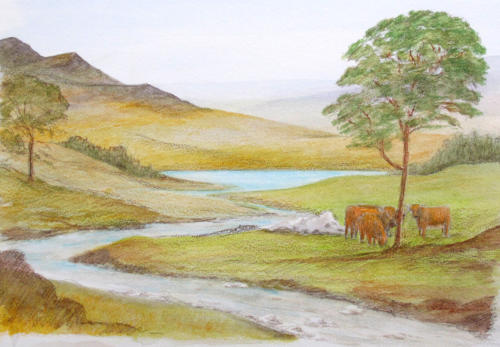 The moral of the story is clear… It is better to work from a reference which starts out to be a reasonable composition. You can always change it, but working entirely without a guide sometimes leads to something less than good.

The exercise, does, though, show the technique of using thin washes to build up a misty aquarelle background.