Burnishing coloured pencil gives a polished, smooth finish to your artwork, by moving the wax that you have put down on the paper.

This is normally one of the last steps, having used the layering technique first to build up the strength and contrast in your image.

Let's look at burnishing coloured pencil in more detail below.

What do you need for burnishing coloured pencil?

Your burnishing tool of choice could be one of these...

The first of these, the burnishing pencil, contains a similar wax material (without colour) which picks up the pigment and spreads it out to remove any individual lines made by the coloured pencils.

Using a lighter or white coloured pencil will achieve the same effect, but at risk of lightening the colour that you have built up previously. As the surface of your artwork will be rather slick after the burnishing process, it's difficult to add further layers on top to bring back the depth of colour.

How to burnish coloured pencil

This is a method of pressure blending the colours on the paper by applying a further series of layers of wax. In effect, we are pressing the pigment and wax layers together and producing a smooth polished effect. This will rely first, on the amount of pigment already on the paper. Burnishing works best if there is a good amount of earlier colour to work with.

To provide a simple illustration, I show below four images giving the stages of...

For the illustration I have used cartridge paper (ideal for wax type pencils used entirely dry) and a selection of colours from the Caran d’Ache Luminance range.

We can carry out this technique out with most coloured pencil types, but the softer wax based brands work best for burnishing coloured pencil. These can also include Prismacolor Premiere, Derwent Coloursoft.

The initial layers laid down lightly on the paper establish shape and form, with areas of shadow and highlight. The pencil is stroking the paper so lightly that the grain of the cartridge paper shows in the granular covering of the brown pigment. 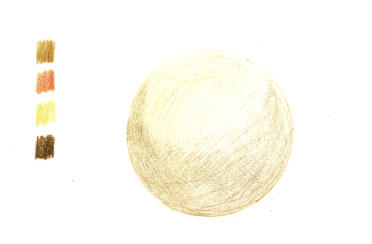 As you can see, we have added some further colour to develop the three-dimensional shape of the ball.

These lightly laid down layers of colour still show the grain of the paper, but we are getting an excellent base of wax based pigment on the paper to work with. Burnishing coloured pencil depends on a blending process, and we must have something to blend with.

I have used some new colours but have gone back over with more layers of some of the earlier ones as well. 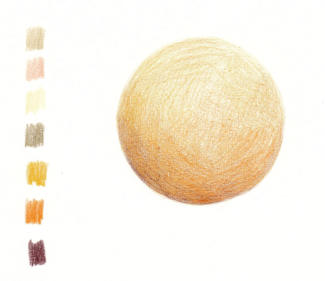 Here you can see that we have introduced a stronger yellow/orange over the whole shape and then burnished with heavy pressure.

You don’t need a sharp point on the pencil for this - the pencil is merely a tool to add a thin covering of colour and work it in to the existing wax and pigment. You can see how the grain of the paper has disappeared from much of the image and the colour has become much stronger, while the transparent orange of the recent layer has not totally obscured the shape and shading that existed before. 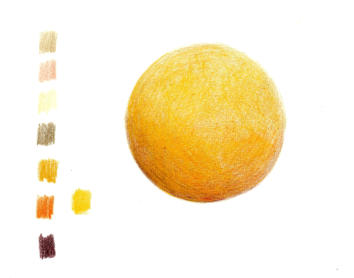 I have now been able to work back over the burnished surface to define deeper coloured areas.

In common with any other artwork, the temptation is to fiddle.

I could continue to work on this image with burnishing the top right highlight with a cream to lighten it.

I believe I have done enough, though, to explain the process. 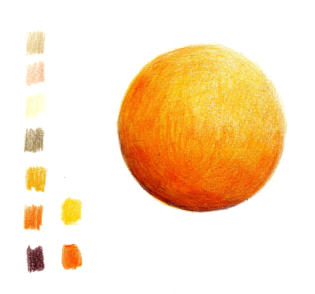 You can see from the above example that burnishing with a coloured pencil will influence the overall colour of the area worked. In addition, it deepens the intensity of colour through losing the grain of the paper.

Apart from dipping into the coloured pencil collection for a tool to burnish with, there are several products made by the pencil manufacturers to fulfil that purpose. These can be called blenders or burnishers and are marketed, notably, by Derwent (both blender and burnisher pencils sold in a twin pack), Lyra (the ‘Splender Blender) and Caran d’Ache (who market a stick of solid wax called a ‘Full Blender Bright).

These separate blenders rely on a stick of colourless material to soften and move the underlying pigment. They can be very effective, though they do tend to seal in the earlier layers of colour and make any further working of the image difficult - or impossible.

The Lyra Splender has been on sale in Europe for several years.  It is not so easy to find but is available from Mail Order and Internet sources.

The Derwent Blender and Burnisher Pencils are a more recent arrival on the scene. They come in single pencils and also as part of a blister pack containing an eraser and a simple sharpener.

The prices are low so an individual mail order for one pencil is hardly economic, but if ordered with other items, they make sense and should be considered.

What do they actually do?

The names give a clue, but as the Derwent Burnisher is more closely likened to the Lyra Blender, and the Derwent Blender is a different animal altogether, they need to be examined and compared in more detail.

The Lyra Blender and the Derwent Burnisher will both act as a resist in putting down a layer of transparent wax that protects the paper surface from later layers of colour. The Lyra Splender is softer than the Burnisher.

The Derwent Blender appears to apply a layer of very soft wax from the core, which acts more as a solvent to earlier layers of colour. Let me say here that I see little difference in performance on top of either oil based or wax based pencils, even though Lyra comes from an oil based pencil manufacturer and Derwent a wax based one.

In a nutshell, I think the test sheet shown below shows up the differences. 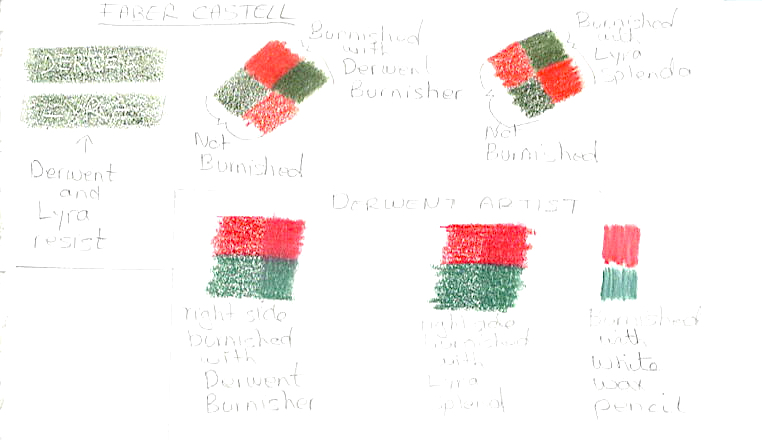 The green bars show the Derwent Burnisher (top) and Lyra Splender (bottom) used underneath the Faber Castell coloured pencils as a resist. The hard points apply transparent wax and indent the soft paper surface, allowing the words below to show.

To the right of these bars are two tests using the Faber Castell pencils once again. The first block of four squares shows the Derwent option and the second the Lyra. The Derwent seemed somewhat softer and mushed the pencils into the surface more, giving a smoother result here.

Just to show the difference, the two odd squares furthest right show the effect of using a white pencil over the top for burnishing coloured pencil. The finished colour is much lighter and less intense.

I tried to use the same pressure as the coloured pencils and the tools in the above tests.

The Full Blender from Caran d'Ache is a solid stick of high quality transparent wax - 100% solid material and 100% usable.

It can be sharpened and works well with all the Caran d'Ache coloured pencil products and other oil based and wax based brands.

The wax is soft - I am told it is the same as the wax used in the core of the Luminance pencils, so we will naturally expect it to work well with Luminance colours.

The test samples below show that the CDA blender works very well with the Luminance colours even on a low rate of colour coverage. The lowest sample shows how the brown is picked up and carried over the white wax colour in all the samples.

With Prismacolor, the white is also carried back over the brown and this shows up well.The wax pencil samples all work well and the only exception appears to be the light sample of Polychromos - an oil based pencil.

If you look at the right hand ( heavier weight) samples, all three tested brands - including the Polychromos - worked well.

The blender has a very soft wax content and really comes into its own when used purely as a blender on a combination of colour layers.

The new blender is shown to be very good at doing what it is intended for. 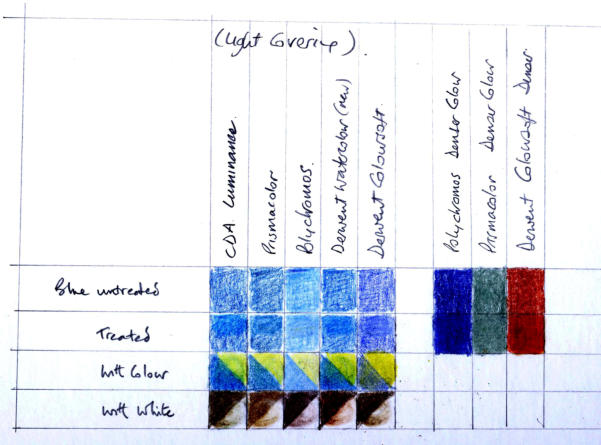 Which should you buy for burnishing coloured pencil?

If you want to Indent to resist colour, you can use either a white ( or light ) Coloured Pencil from your box of pencils, or use the Burnisher from Derwent. The Lyra is less effective.

If you want to blend colour and bed it into the paper, both the Lyra and also the Derwent Blender are very effective.

The Caran d’Ache Full Blender is also good and would be worth while adding to your armoury of bits and pieces.

However, the Caran d’Ache blender will be too soft to use for indenting a line and might be too difficult to use for a resist. You may find it easier to buy the Derwent pair of pencils in the UK, though both the Derwent and Lyra brands are available by Mail Order and over the Internet.  I have all three in my box of accessories for blending and burnishing coloured pencil.