This Gondola painting was first discussed on our old blog and forums that no longer exist. The discussion has been added here for your information.

The painting was worked by Daryl Cogavin, a regular visitor to Peter's coloured pencil courses that he used to run at Knuston Hall in Northamptonshire.

The running order has been reversed so that it now reads logically from the oldest entry first.

If you are interested in drawing boats check out Peter's basic instructional page.

Hi all, I started working on a new picture yesterday, intending it to be ink line and watercolour but now that I have the background in I am considering changing to coloured pencils and making it a mixed media work.

The reference was taken by a friend of mine in Venice.

I have decided to leave out the line of moored gondolas in the middle distance as they make the image very confusing visually. I might decide later to put something in there if it needs it. So here is my initial pen drawing with the background in and a soft watercolour underlayer for the water.

I think I should probably do an underlayer for the dark hulls of the boats too so that I don't have to spend hours filling in the tooth of the paper to get a good dark colour with the pencils.

If anybody would like to comment on the plan so far, I would be very grateful. It is always so useful to hear other people's viewpoints. So don't be shy, chip in and say what you think. :-) 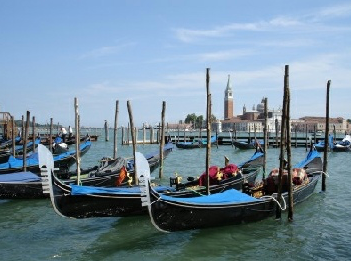 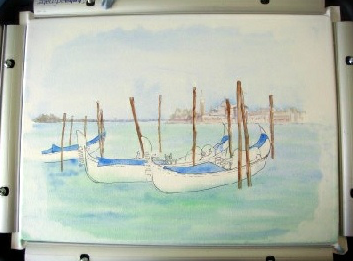 Had a free Sunday afternoon today so I managed to get on with this picture. I painted in the hulls then added coloured pencil colour to the boats and water.

It is much quicker to get colour down with the pencils if you have already filled the tooth of the paper.

At this stage I decided that these two and a half boats looked very lonely, especially as this is a very well know scene, possibly best know for how busy it usually looks. So I decided to put the background jetty in after all but to keep it soft and receded.

Now I just need to darken the foreground water and steady my hand to draw in the 'ropes'  looped round the mooring poles. Does anyone know what they are made of? They don't appear to hang the way rope would - they look more like pieces of hose pipe. 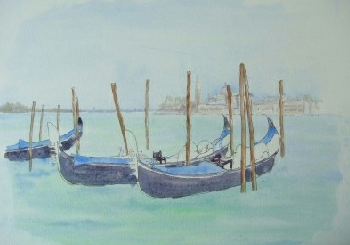 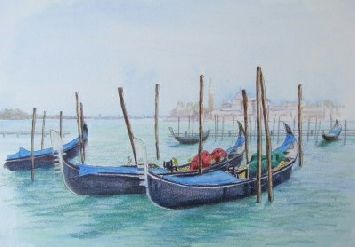 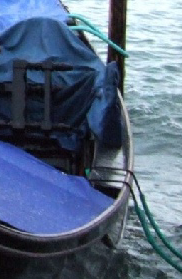 This is a detail, Daryl, from a 2007 photo taken at (nearly) the same spot and shows the way the ropes are protected.

I added the ropes using some white gesso and a very small brush which seems to have worked ok. The gesso surface took the coloured pencil very well in the areas where I wanted to tidy it up a bit.

And then the final decision was how to crop it. I wanted to move the horizon up as it is currently almost in the middle, so I have cropped more at the top than the bottom and brought the sides in to get rid of the ragged edges. 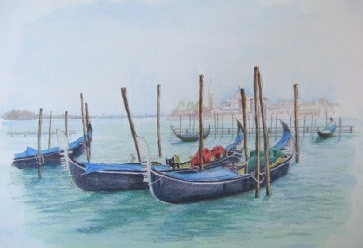 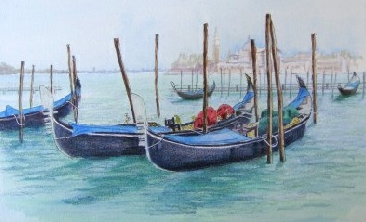 The finished size is now about 11 by 7 inches.