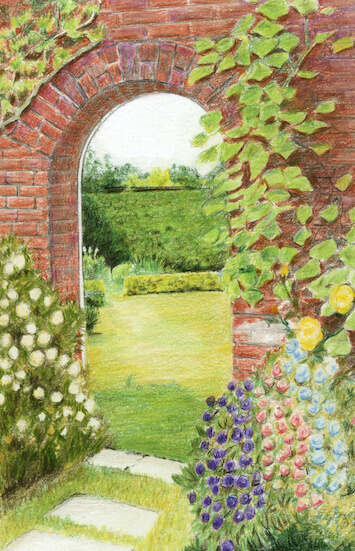 Draw a garden archway step by step, featuring the Rectory garden in the village of Tiffield in Northamptonshire. The reference is a merge of two photos.

The original exercise was used by Peter for several years as a course subject and uses Polychromos coloured pencils on Daler Rowney Langton botanical hot pressed watercolour paper (300gsm). It was completed over a two day coloured pencil course. Should you wish to draw along you will not be constrained by time and will therefore be able to complete the picture in more detail.

The first picture below is the original main photo reference. The other photos of flowers were merged with the first one in Photoshop to give more interest and colour to the finished drawing. 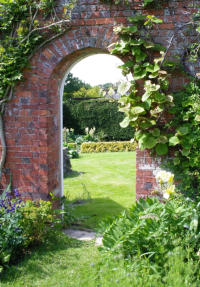 You can download the outline to trace here. I have also supplied a large version of the merged photo for you to download.

Start with the background through the arch

Once your outline is transferred to the paper you can start to draw a garden for yourself.

The first area I suggest you tackle, is the garden scene inside the archway.

Be careful to leave some areas of white against the dark hedge so that the light foliage will show up later (see below), and working with a scribble stroke, fill in several layers of green on the high hedge.

If you look at my finished example, you will see that I have changed some elements a little - I have missed out the visible building in the background and I have also substituted some bushes to the left of the arch rather than the bit of visible wall. Make sure you leave the white painted edge to the doorway clean of pencil marks.

I have put in an additional flagstone in the near foreground to lead you in to the scene.

Keep your options open about how many foreground flowers you want to include. The actual archway didn’t have any flowers beside it and I imported the flowers from two other photographs. You are free to do the same or to replace my creamy white ones with another colour. 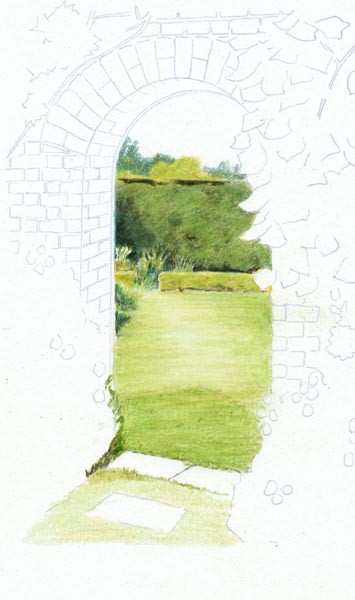 Build up your darks in the hedge with sepia as well as dark greens, keeping a scribble stroke.

I protected some of the lawn surface with some initial horizontal shading using Ivory but you could use white as an alternative. This enables later layers of green to stay much lighter.

Use horizontal shading for all the early layers of the short grass and build up the shaded area near the arch with short vertical strokes. 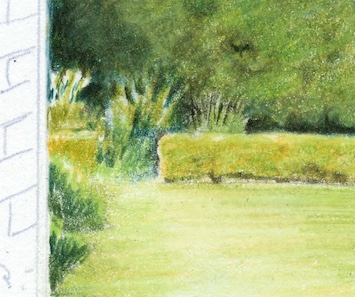 Above is a close up of part of the scene through the archway.

Those taller plants against the hedge need careful treatment, You will need to leave areas of white and for this it may help to actually put some white pencil down to protect the surface from your dark greens as you do the hedge.

You can then scratch back into the green where it has gone over the top of the white and work your light grasses.

The area under the edge of the lower light coloured hedge will be shadowed. Look for places where you can play light against dark and dark against light.

It helps to complete the view through the doorway as much as possible as it will give you encouragement when you get bored doing the bricks! 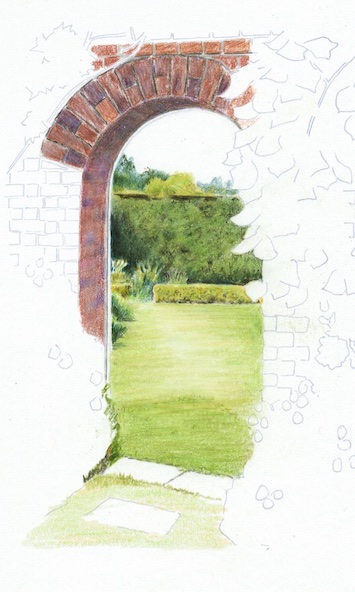 You can now start to look at the brickwork. The perspective is awkward and you need to ensure that bricks below eye line slope downwards as they get nearer, and those above eye line slope upwards. For more detail on drawing bricks see this page.

Make sure that you keep the lines of mortar consistent on both sides of the arch. Mine are not perfect. Bricks will be shadowed at the bottom edge and light at the top edge as the light comes from above and the bricks protrude slightly from the mortar.

Each brick has a unique colouring but all will tone together. I suggest you sort out a selection of pencil colours and use them in varying layers. I used mainly reds, browns and purples with some ochres and some light greens. 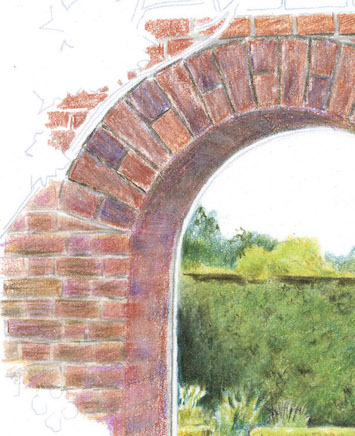 I have started at the top of the arch, and I suggest you do the same. I have used a combination of natural reds and browns leaving the mortar line white and also being careful to leave that white strip around the arch edge. Leave the branch lines of the creeper so that you can show them light in the sun later. 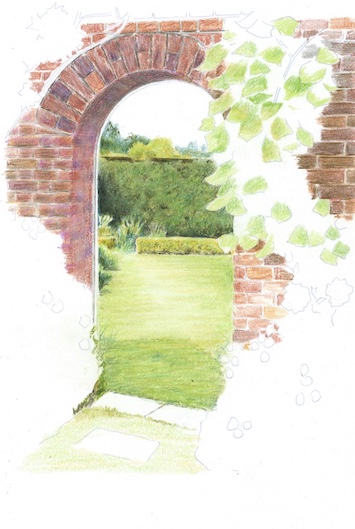 Keep your early leaf shading to light greens, you can darken them later and don’t forget to bring in some golds into the mixture. 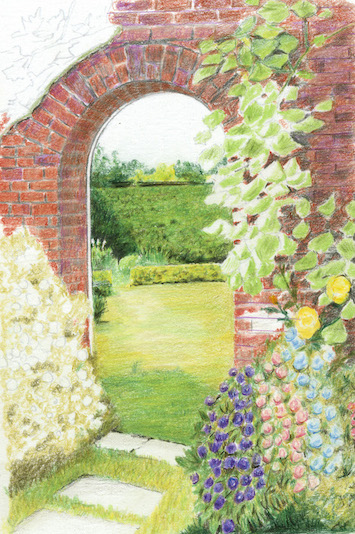 The flowers are my version of what is shown in the original photo. Watch the lines of brickwork they can easily go adrift.

In my examples ( below) you will see that I have simplified the yellow flower bush to the left of the arch and as the flowers are in the foreground and need to be detailed, have outlined the blooms carefully with a dark green pencil to define the edges.

The creeper leaves have been darkened around the edges and shadowed behind to make them bounce forward.

I have darkened the lower edge of each brick where they catch the sunlight and this makes the bricks more 3D. Make sure you darken the inside of the arch to frame the garden scene.

Your picture will look different to mine as you will use different colours and different strokes. If you use a different brand of pencils this will also affect the finished work as you will have different layering ability with the pencils.

Make sure you get your shadows really dark in the flowers and behind the vine leaves so that the bright colours are highlighted and you get the sunshine into the picture. The prime focus is where the dark hedge on the left in the background meets the white of the wood surround to the arch.

The photo below shows another attempt to draw a garden from the same photo reference, using Pablo pencils instead of Polychromos. There are different reds and greens in this set. In this drawing the right hand creeper leaves are smaller, and there are more of them. 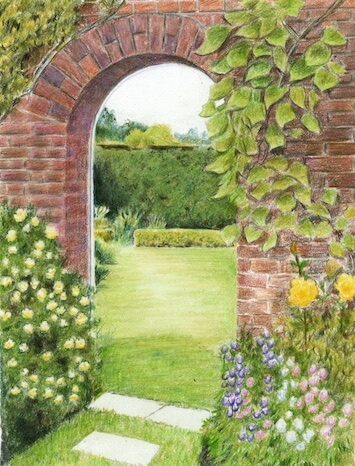 You have a lot of flexibility in the picture to include elements of your own. There is a tracing you can print out and work over on heavy cartridge paper, or you can trace your own from the provided photo and then work on heavier watercolour paper. The paper needs to be fairly smooth to get the detail, but some grain in the paper will help with the working of the rough brickwork. Best of luck !

Image, Notes and Photograph are all Copyright of Peter Weatherill © 2009 MK14 7DY