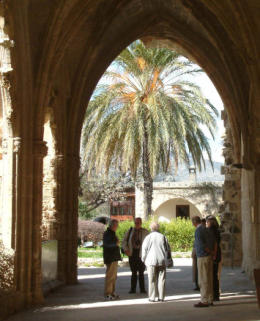 This mixed media tutorial will cover the use of pastel pencils and wax type coloured pencils to depict a scene from Northern Cyprus.

The photograph was taken at the Abbey of Bellapais outside Kyrenia. This area was the home for a short time of the writer Lawrence Durrell who wrote of his experiences between 1953 and 1956. This was the start of the Cyprus 'problems' over a Greek Cypriot wish to merge Cyprus with mainland Greece.

The book 'Bitter Lemons of Cyprus' won several awards and is well worth reading for its humour and sympathetic telling of the life of the local people.

The image featured in this mixed media tutorial will introduce a number of techniques - some new to me at the time!

The aim is to use the photograph as a resource and interpret it loosely. Please do not expect the result to be in any way an exact duplicate of the photo.

The drawn image is 9 ins x 7 ins. My plan is to work the pastel dry and fix it before working detail over the top.  That is a traditional and controlled approach and one I know will work. The finished picture won’t have the loose feel I was planning originally with a pastel surface washed with solvent. Never mind...

The first step is to prepare a sheet of suitable paper. I have selected a sheet of grey Winsor & Newton 160gsm 'Tints' pastel paper from an A3 pad.

I drew out the details of the archway fairly accurately. I only included three people standing within the archway. 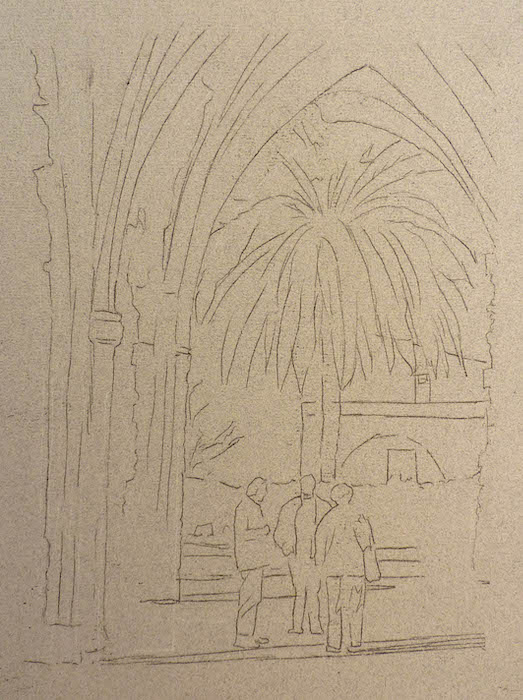 Broadly speaking, the medium differs from coloured pencil in that the pigment is held in an opaque carrier (usually calcium carbonate in some form) and is laid down in layers, but mixed on the paper when mixing is required.

Mixing can be done with the pencil point of the added colour, or with a ‘torchon’ - a paper stick that picks up and blends the dry colour, with a silicone blender (Colour Shaper) or with the artist’s finger.

Unlike coloured pencil medium, where the pigment is largely transparent (or semi transparent) and sits firmly attached to the paper by the wax or oil carrier, Pastel pencil medium adheres lightly to the soft paper or grit paper surface mainly by friction.

Pastel is therefore easily dislodged or damaged, and we therefore have to ‘fix’ the material to the paper surface using a varnish type of spray (much like hair spray) if it is going to suffer further treatment or abuse.

The fixative holds the pigment from damage but in return darkens colours, so some vibrancy of tone and colour can be lost. Pastel artists usually reserve the final steps in a picture to refreshing highlights and areas of maximum contrast after the last fixative spray.

The fixed surface has a slightly gritty feel to it and will therefore take additional work from wax type pencils. Hence the suitability of Pastel as a base for Mixed Media with coloured pencil.  Pastel Pencils are generally harder than the old soft pastel sticks, sharpen to a good point, are therefore capable of fine detail and quite a lot cleaner to use.

The paper has basic shapes and colours blocked in with the pastel. The effort at this stage is to cover the paper and lay down the approximate tones of the finished work. The arches are put in and the background under the arch is given a treatment of white which will provide a good base for later colours, but will keep the tones light.

Lighter area of stone are also noted where the sun strikes on the left. At the moment the figures in the middle are left as drawings. A grey is added for the floor shadow.

The pastel pencils being used are Carbothello from Stabilo, as I have a full set of the old colours (72) and whilst I could just as well have used another brand from a quality point of view, the brand choice would only have given me a maximum of 48 colours elsewhere.

The new formula Derwent Pastel pencils are excellent, and the full set comes with 72 colours but I only possess 36 of them! 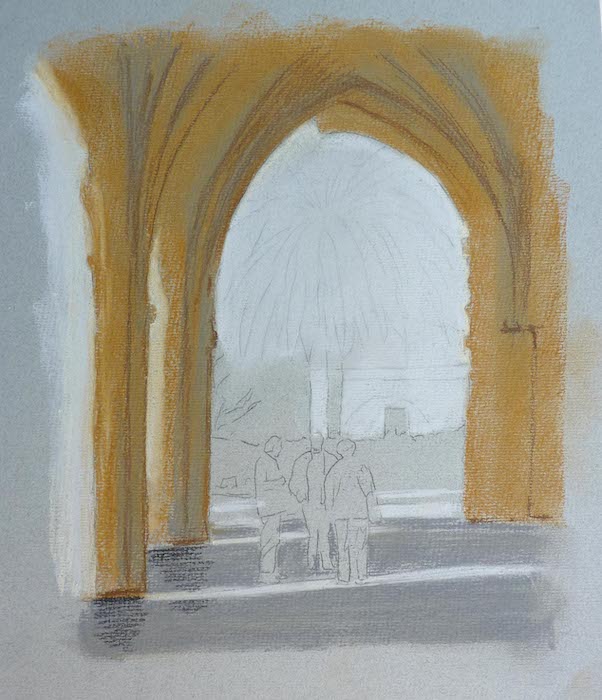 Having rubbed the pastel colour into the surface of the paper, the whole worked area is then fixed with a pastel fixative spray. This darkens the colours, but stops dust flying about and provides a more secure surface to work detail into.

You can see in the image above, that edges have been tidied up, some areas of shadow have been put in to show the internal roof arches and the rays of sunlight have been more closely defined on the floor.  In the background, more white has been laid down in the areas that will be sky and a touch of pale blue has been rubbed in to the white to give an even paler blue.

The stone colour is more strongly ochre than in the original photo, and also much lighter, but this can be adjusted later if it needs to be. The colours and tones need not be exact to the reference - after all this is an interpretation of the photo.

Elements of the reference may be omitted or altered.I am not sure about the right hand column base. It is correct to the reference, but doesn’t look right at the moment, and I think will have to come down level with the base of the far left hand column so that a viewer of the picture will not feel that something is adrift.

As it stands at the moment, I think I will probably work the background tree in CP, and I may well also work the standing figures in CP too.  They will all need a secure, coloured, pastel base anyway, so there are still decisions to be made as we go. 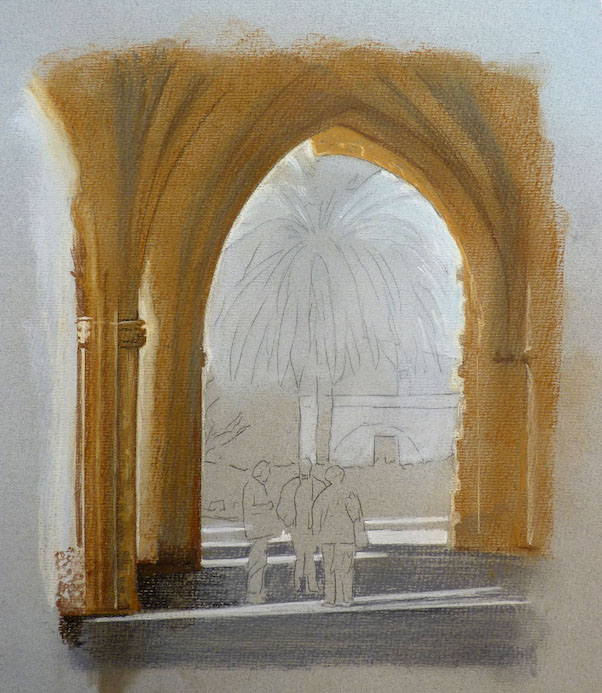 Apart from some possible afterthought when I look at it tomorrow morning, I think that is the underpainting complete. The pillars are upright and the whole thing looks convincing.

I have already given the paper one spray of fixative and I will go back in tomorrow and give it a second coat to make sure the pastel is well set. The paper should then take Coloured (wax type) pencil on the top. 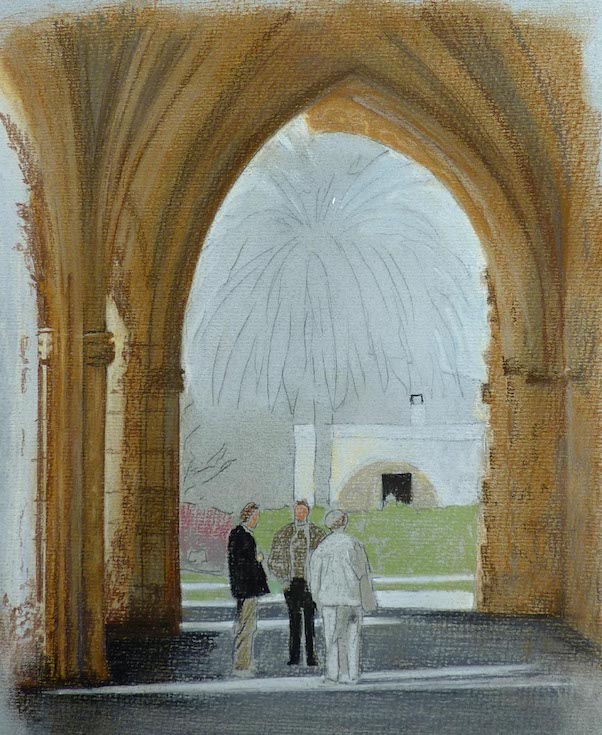 I looked again at the under painting in pastel and decided that after fixing for the second time, it needed another layer of dry pastel pencil to provide a more solid base for the highlights and I have also completed some colour in the tree as well

.A general overhaul of all the surface with more pastel pencil has produced a better result and I am much happier with it.

Once again I will fix the surface and then, hopefully, introduce some CP to the equation.

That is - unless I have further ideas of completing the whole thing in pastel !!!!!

The picture is quite tempting ..........But then it wouldn’t be a mixed media tutorial, would it? 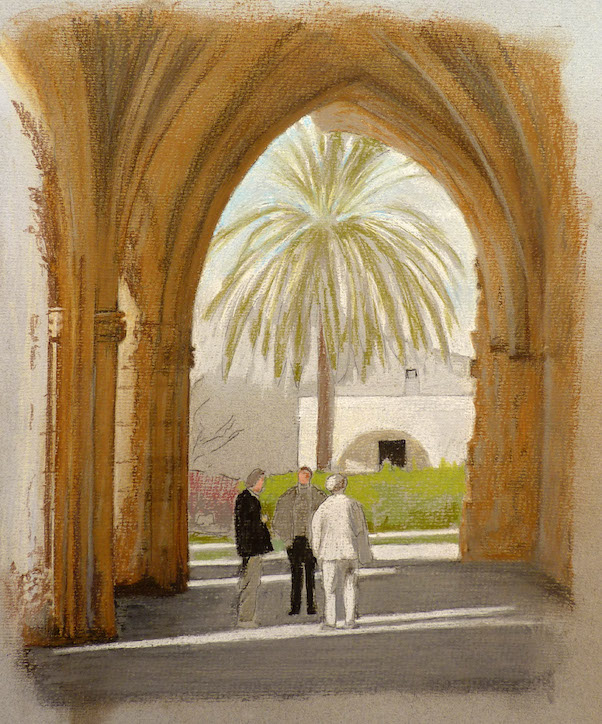 I have taken a grip of myself and decided to go with what I have.

I have selected the box of Caran d’Ache Luminance pencils to work the CP with as these are very soft and the white is very opaque.  The nearest other similar pencils would be either Derwent Coloursoft or Prismacolor, but it is a while since I used the Luminance pencils and the colour scheme offered by the full set is very suitable for this picture with a good range of stone colours.

You will see that I started with the standing figures and found the CP went over the fixed pastel beautifully.  I then re-worked the floor and highlights and went on to the background building and hedge.  I have also worked the tree trunk and put in the almond blossom.

It is essential to get those very light highlights in at the start.  There will be detail to add to the building and also to the almond tree and the reddish bush in the foreground.  I have left out the other nearby buildings in the  background as they are merely confusion.

Next steps will be the palm tree and the background hillside and then the almond tree.

I have yet to decide whether the stonework of the Abbey will be best worked in fine point pastel pencil - I think it might.

The light is changing as I take the photos here so there is some variation in how the whites are shown in the images above. The image below is about right to the original. 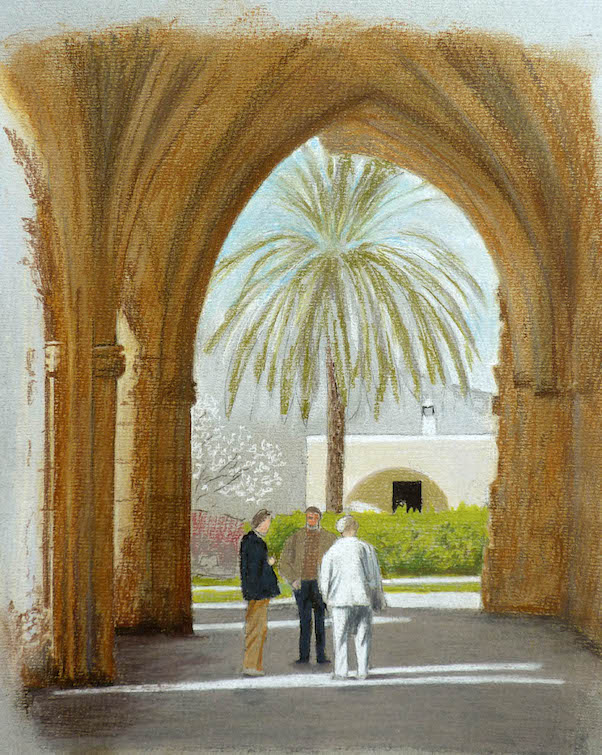 Detail has now been added to the  palm tree and to the smaller almond tree to the left of it.

Some general improvement has been made to the detail around the hedge etc and the sky behind the palm tree is now in place.

I have found the addition of the soft wax pencil surprisingly easy over the fixed pastel.  I was not a great lover of the soft touch of wax pencils but when used in this way they certainly work to their best advantage.

I don’t think I will add a great deal more to the picture within the arch, and the only decision now is how to deal with the stonework.

The wax pencils worked very well in providing detail, but I don’t really want much detail in the shadowed area of the surrounding stone.

I favour pressing on for a little while with the pastel pencils and slightly darken the frame that holds the picture together - stone and floor.  I will also add some darker areas of shadow to give clearer form to the arches. 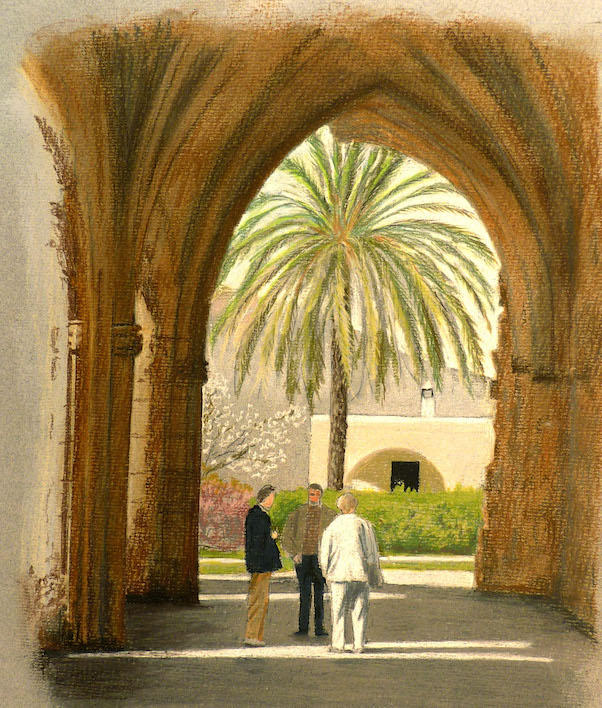 When is a painting finished?

Well the answer is ‘when it looks complete’, but usually before the artists has interfered with it just a bit too much !

In this case I will do what I usually do.Prop it up at the side of my desk and look at it for a few days and resist doing anything to it for a week.I will then see what it looks like in a mount and decide then if anything needs touching up around the edges.

In this picture, I want to keep that strip of bright sunshine on the extreme left hand side stonework.‘

Squaring off’ the picture for the mount may reveal some bits that need attention in the corners.

I have completed the picture using pastel pencil only, for the final adjustments.

My finished version of this mixed media tutorial using pastel pencil and coloured pencil is below. 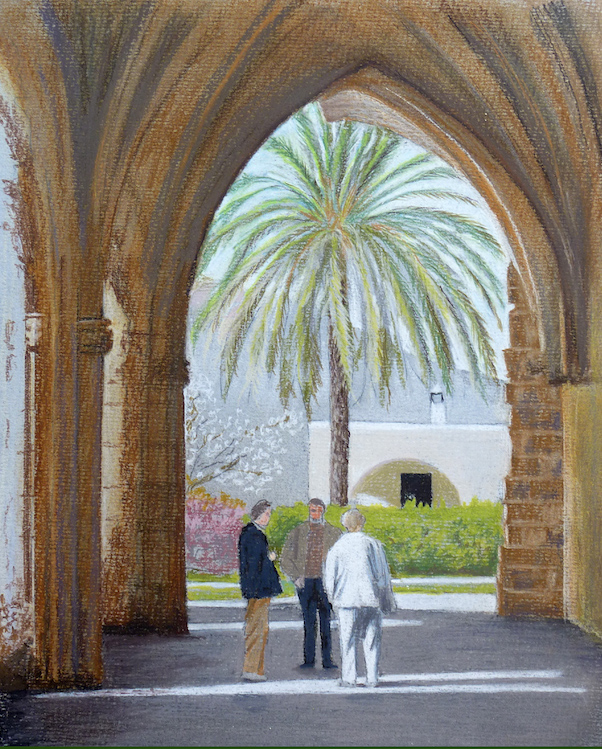