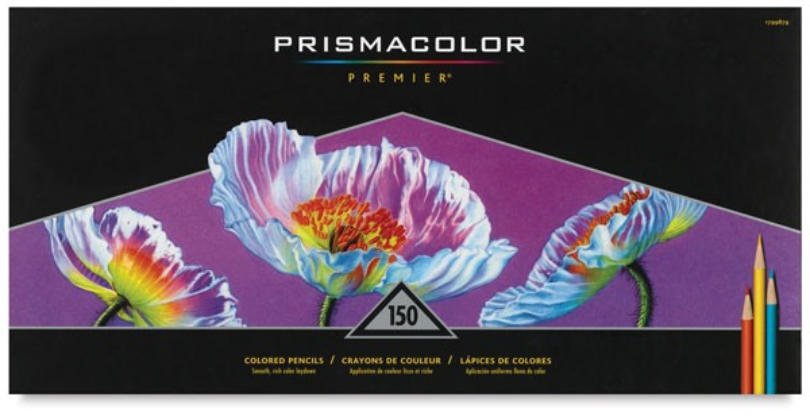 The Prismacolor Premier pencils are manufactured in the USA by Sanford, part of a major US conglomorate.

A Sandford subsidiary, Berol, used to make an identical pencil (KARISMA) in the UK until the plant was closed by an economy drive several years ago. Later, Karisma pencils were all marked 'Made in the USA for Berol'.

There are signs of the Prismacolor Premier pencils appearing in UK specialist retailers and they are readily available through UK based Internet suppliers, such as  1buy1pencils.co.uk and purepencils.co.uk.

However, if you are just looking for sets, you can find them on Amazon. At a price at the time of checking (January 2020) they were less than £100 for the set of 150 making them a very inexpensive pencil to buy.

They are even cheaper to buy mail order in the USA, but it is uneconomic to buy from the USA for shipping to you in the UK, as VAT and import Duty, as well as high shipping costs, take the price way above the Amazon UK offer.

For this reason I recommend you try the stockists listed above or check for an Internet supplier in your local country in Europe.

Suppliers of individual Prismacolor Premier pencils in the UK include...

The standard ‘Premier’ line has the same core and many of the same colours as the old UK Karisma brand, so Karisma users in the UK are not totally without their ‘fix’.

The pencils are made with a wax binder and are soft in feel, working at their best on a softer surfaced paper such as are produced for making prints ( Stonehenge - made in the USA is an example).

Until Caran d’Ache produced Luminance, and Derwent marketed Coloursoft,  Prismacolor pencils were the softest made.

Production problems since that time sometimes result in pencil stock going out for sale with bent wooden outer sleeves, broken and loose pigment cores, so that buyers in the USA report  a number of methods to keep the pencils working - such as cooking them in microwaves to re-fix the cores. The quality standards from the Mexican factory appear to be lower than European makers.

The Prismacolor Lightfast line ( all pencils manufactured to ASTMS 96901 ) has been discontinued and there is no indication when ( or if ) it will again be available.

In October/November 2011 Prismacolor in the USA announced the return of the Deco range of colours that had been previously discontinued and announced the addition of a number of new colours to their Premier range ( the main selection). This additional 18 colours makes the range up to 150 colours.

We still get reports of Prismacolor Premier pencils being shipped for retail sale which consistently break, are bent and have cores which slide out when used.  Quality control does NOT seem to have improved with the move of manufacturing to Mexico.

My own feeling is that if you are going to spend between £1 and £1.50p each for pencils, you need to be sure they are going to be useable, and if they prove to be faulty, you need the ability to complain and return the faulty goods.

In Europe, this is much easier, and I have not come across similar complaints with any of the main European manufacturers.

In AUGUST 2012 Peter made enquires of a number of contacts to see if the problem relating to poor quality open stock pencils had been sorted out. It would seem not.

Manufacturers in Mexico of Prismacolor open stock ( single replacement pencils) seem still to be having trouble.  Stock continues to go out to retailers which has loose or broken cores that may not be centrally positioned, bent and warped wooden covers. The off-centre cores can result in difficulty sharpening the pencils.

Not only are there still USA reports coming through, but also recent reports from Australia.

Clearly the manufacturers are not concerned that their good name is being wrecked by poor standards, and are relying on the sheer bulk of sales in the World’s largest pencil market (USA) to carry them through.

Fortunately there are no reports of problems from the UK, where the brand has only small exposure and that mainly through Internet sellers who clearly inspect the stock before they sell.

Over the last 5 years Peter made several enquiries about these faulty pencils and had similar complaints, so not a lot has changed.

In JULY 2017 when he started to put together this new set of notes for Topics, Peter looked again at this problem.

From reviews from buyers of Prismacolor over the last 12 months, there are still complaints of breaking and broken cores and splintering wood, as well as loose cores falling out. It is clear the problem of poor quality manufacture is still present. Although there are reports from some buyers that they have had no difficulties and that they were very happy with their purchases.

Sanford seem to be happy to market a high volume, low quality product at a low price.

In MARCH 2019 he read a recent comment online about Prismacolor Black and White pencils - the writer commented that they would be an excellent product if only the manufacturer bothered to centre the cores correctly so that they sharpened properly. Nothing seems to change !If you are buying in the UK or Europe, make sure that your returns facility to the seller is good.