The low cost Spectrum Noir coloured pencils were introduced on to the UK and US market during the early part of 2015.

They are designed to meet the need of the craft market and in particular those who hand craft greetings cards. The early version proved to be subject to manufacturing faults with buyers reporting broken leads, gritty pigment strips and cores not centred - producing off line points.

The Spectrum Noir pencils were manufactured in China to a low price point and sold in 5 sets of  24 non-repeated colours.  The price over the internet was around 50p each in the UK, making the full set of 5 boxes of colours (120 pencils in all) around £70.

Colours are not available singly, so replacements require a minimum box size of 24 to be purchased.

No indication of lightfastness is given, but bearing in mind the chosen market for the pencils, the artwork is probably not intended for long term display.

The distributors in the UK ( Crafters Companion) were invited to provide Pencil Topics with sample pencils for testing, with no response and no samples appeared.   Readers of the site here have critiqued the pencils from their own purchases and suggest that they are ‘good for the price’.

In September 2015, Peter had the opportunity to test some from a full collection brought to a course by one of his students.  We did a test jointly and compared the Spectrum Noir with Derwent Coloursoft and Caran d’Ache Luminance. This appeared to be a fair test as the Spectrum Noir pencils were described as wax based and we were comparing like with like.

"The Spectrum pencils are priced at approximately a quarter of the price of the Caran d’Ache Luminance pencils. Testing them side by side on cartridge paper, the difference was not as extreme as the price difference might indicate. Although the Luminance were clearly head a shoulders above the other brands and the Spectrum Noir branded pencils very much the underdog.

The Spectrum pencils behaved reasonably well. The layering quality was acceptable. One or two of the pencils revealed the gritty feel that our previous critic noted.  All the pencils appeared to have centred cores and none of those tested appeared to have broken successively down the pencil.

No indication was given on the side of the pencil, or on the box, about lightfastness ( I suspect that no tests have been carried out)."

However, my conclusion is that these pencils would be acceptable for a student on a budget, who was not concerned with the pictures lasting and who was only concerned with developing technical skills.

If you take price into account, the Spectrum Noir were a reasonable buy for the low price.  I have handled far worse pencils.  In comparison with the other two main brands, the difference in quality was obvious.  I would not describe them as a ‘good’ pencil, merely ‘ good for the purpose they appeared to be designed for’. 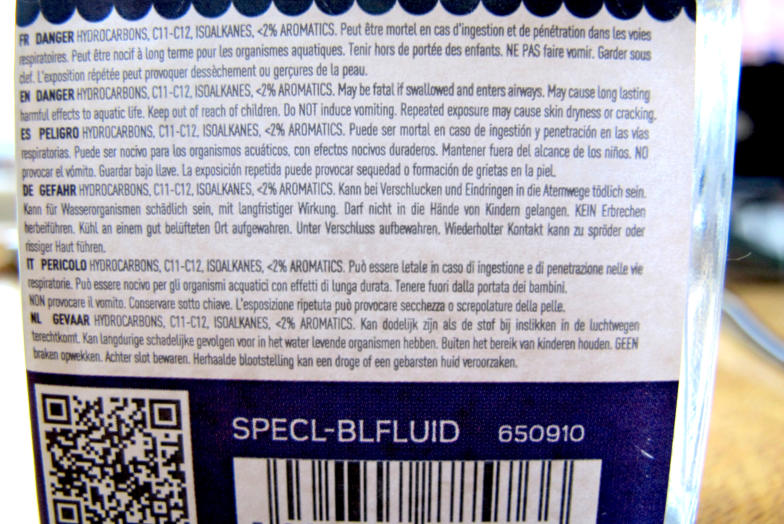 The Spectrum pencils are designed to be used with solvent to work and blend the colours laid down, and the company markets a solvent to do just this.

I have a caution to make on the solvent. The small bottles are expensive to buy compared with the amount of liquid, the warning notes on the side of the bottle about danger to health and danger of fire are almost illegible.

The liquid is hydrocarbon based and without smell I understand it is manufactured  by Gamblin who also make Gamsol solvent.  Gamsol carries comprehensive warnings which you can read if you wish to do an internet search.

My recommendation is that if you wish to blend wax pencil, you use a safe product like Zest-It.  Use it very carefully, via an intervening pad to control the amount of liquid taken up at any time. There is a more comprehensive item about this (and the SN Blender) on the page covering Solvents in the SKILLS section of the site

The solvent works, and leaves no apparent residue. It was sold in the bottle I purchased without a controlled method of using and it would be easy to spill the liquid or use too much. The recommended use of this type of solvent is through a pad holding a small amount of liquid which is taken up by a brush from the pad.  If the makers intend this to be the method of use, nothing is stated on the bottle.

If you wish to use a solvent with these (or any other wax based pencils), the alternative Zest-It citrus based solvent is totally safe, non-inflammable, and cheaper. It leaves no residue and is available in both the USA, UK and Europe via the Internet.  Zest-It is about £10 for 250ml.  Spectrum solvent is around £6 for 75ml - about twice the price. 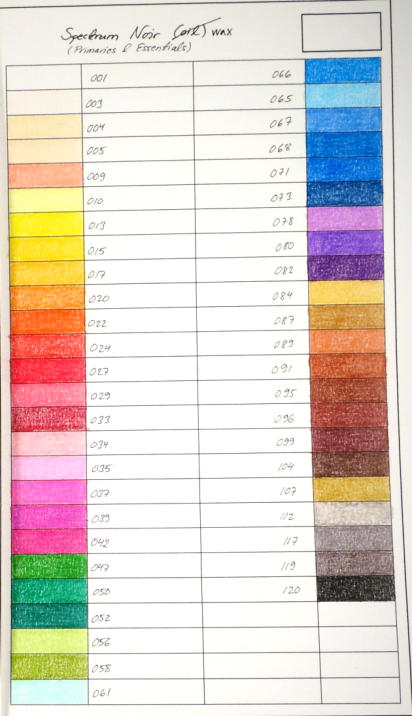 In December 2015 it was noted that Dick Blick in the USA was selling what appears to be an improved version of the Spectrum pencils.  They are named Spectrum ‘Colourblend’ and are sold in the same type of 24 pencil sets as the older version.  The price is higher than the Spectrum Noir pencils, and it may well be that the Crafters Companion marketing firm have decided to aim for a better quality pencil replacing the Spectrum Noir brand.

The new Colourblend pencils were starting to appear in craft stores in the UK in December 2015 and a full set of 120 pencils sold for the order of £90 rather than £70.   At this price they are starting to approach the prices of pencils like Polychromos when sold on special offer.

HOWEVER whilst initially dearer, the higher quality Polychromos are available singly to enable you to re-stock your collection, so long term will be less costly, as you will not have to buy pencils in sets of 24 you don’t need.   Polychromos are an oil based pencil but they do respond well to the use of solvent. They are a harder pencil than the wax varieties, but enable fine detail to be achieved.

I have chosen to match the Colourblend pencils to Polychromos as both are sold in a range of 120 colours.

The alternative on price, Derwent Coloursoft wax pencils are sold in sets or 72, and whilst they can appear in shops at bargain prices from time to time which bring them into the Spectrum orbit, the Derwent colour range is more restricted and the colour sets are more suited to landscape images than decorative art.

As of December 2016 the new pencils have not been seen or handled here.  If we have an opportunity to test the pencils we will do so and report.  Any readers buying the Colourblend pencils are invited to test and compare with other brands and let us have their opinions.

There is clearly a market opportunity for a low cost pencil that is of good enough quality.

This web site is not in the business of making recommendations and we are cautious over coloured pencils that do not have any indication of lightfastness, as colour fade in normal daylight can be a real problem to finished artwork.

I suspect that there could be further notes on this page in coming months though I have had no feedback from our readers in the last year - it may be that the people who buy Spectrum Noir pencils are not the sort of people who read websites like this!