Is there a safe colored pencil solvent? And if so, why would you want to use it?

Once you have applied some pigment to your paper that is not the end of it. Apart from layering more pencil on top to get greater strength of color and deeper contrasts, we can develop the actual pigment where it lies on the paper surface and move it around. The pencil core is, after all, a mixture of pigment and waxes/oils which can can very mobile materials

I am repeating here a similar warning to that given in the section on fixatives.

The only liquid that colored pencils are designed for is, in the case of aquarelle pencils - WATER. Very few liquids in the art world are manufactured specifically for colored pencil use. This is notably so in the area of fixatives and solvents.

There is one reasonably safe liquid I am aware of, made for dissolving wax pencil and that is Zest It pencil and parchment blend.

If you wish to add anything else in liquid form to your artwork either as a brushed on or sprayed on material, first check the manufacturers instructions.

If it does not specifically say that the product is made for colored pencil use, then it probably isn't. That doesn't mean that the product cannot be used. Simply that before use you need to test the liquid thoroughly on a similar surface which carries similar media to the one you wish to treat.

Do not risk your carefully worked and blended colored pencil artwork by applying solvents without testing first or without guidance from the manufacturers instructions. It will normally prove safe to do so BUT you never really know... until you try!

The notes below are offered without any guarantees of effectiveness. They should simply guide your own research.

There are many methods to dissolve and blend an oil-based color on paper, but they often leave an oily residue around the area treated, and this may take some time to clear.

You don't want your artwork to get damaged, so test your solvents before using them. Then dispose of all solvents in an appropriate container after use and work in a well-ventilated area.

There are options designed for art and pencil use, including the familiar Zest-It  colored pencil solvent which is a non toxic, non inflammable and fully biodegradable.

The chemical classification of the original ‘Citrus’ product is Orange Terpene - substance number CAS:8028-48-6. This is a solvent which was sourced from citrus material (often the rinds of oranges used for fruit juice production) and not only acts to dissolve the waxes in the pencils, but also acts as a de-greaser and glue remover.

Some users had commented that they didn’t like the citrus smell, and I see a newer version of Zest-It is now available through art supply sources such as Jacksons Art Supplies, Ken Bromley, and also direct from the manufacturers in the UK. The new version is without the citrus smell and is described as ‘Citrus Free’. I understand the original version is still available.

It is probably the safest solvent on general sale.  It is non-flammable (and many solvents are highly inflammable), it is environmentally friendly, and what is most useful, it leaves no residue on the paper. However some artists have reported headaches after using it.

In August 2015  I was able to locate a seller of Spectrum Noir products, who not only sells their craft lines, but also sells their pencil blending solution.

This colored pencil solvent was suggested to me by a reader in Finland who also critiqued the Spectrum Noir pencils (which she did not recommend). The solvent is very expensive at £6 for a small 75ml bottle. It proved to be effective on the two brands of pencils I tried it on, Polychromos (oil based) and Coloursoft (wax based). It had no smell that I could discerne.

A scan on the results is shown here below, together with tests on the same paper, with the same brands, and utilising a third cheaper but similar solvent. This test was carried out on a rough surfaced 500gsm Bockingford watercolor paper, so there were plenty of white flecks visible before treatment. The paper dried quickly and there was no residual stain.

There seems to be little difference in the effectiveness of the three solvents.

The results of the tests are shown below. 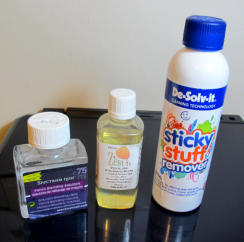 Odourless mineral thinners, such as those sold for oil painting, will also work but may leave more of a permanent oily mark on a paper surface.

If you are using a mineral based spirit (Odourless Mineral Spirit is sometimes referred to as ‘OMS’) then be cautious about the amount you use.  This liquid can soak into the paper surface and stain it, leaving a ring of dark around the edge of the area treated.  For this reason the recommended technique is to use a paper stump to take a small amount of the liquid from a safe container that can then be used to manage the pencil pigment on the paper without wetting the paper surface.

Some of these liquids are also labelled as 'Toxic' in the USA and are inflammable.

In the USA and also sometimes available in Europe, the solvent ‘Gamsol’ can be used. This is a mineral based odourless solvent from a petroleum base that has a higher flash point than turpentine and is also generally sold as an oil painting thinner. This product is advised as being safer than white spirit. It certainly has no smell and is available from several suppliers in the UK and Europe.

The Spectrum Noir blending solution quoted above is manufactured by the Gamsol company (Gamblin) and my guess is that it is identical.

Turpentine Substitute - also sold as Turpenoid - is another option.

Possibly a safer option to using thinners or solvents from a bottle is to use a pre-packed solvent in a fibre tipped ‘pen’.  These are sold by a number of art product firms such as Tombow, the Finesse blender pen, Derwent's blender pens (with nibs in two sizes) and Sanford’s own brand Prismacolor blender marker.

This can be a dearer way of using solvent as the amount of liquid in a pen is small, but the more gentle application will probably be of benefit. The solvent is often alcohol based and they do work.

If you are using any of these solvent options, be sure to test out a sample on a similar paper and your chosen pencil brand colors. Some solvents have been known to change the color balance of the pigments.

After treatment you may find that the solvent has bedded the pigment into the paper with a lot of the wax/oil carrier and the resultant picture surface may be matte where the treatment has taken place. This may stand out against the more polished surface of the rest of the picture.

It is possible to work the solvent into part of your picture to soften the pencil colors, and then blend them using a wax type burnisher such as the fairly hard Derwent burnisher, the Faber Castell burnisher, or the softer wax based Lyra Splender Blender and the Caran d'Ache Full Blender Bright blending stick.

Baby oil has featured in the past in articles about colored pencil solvents. I agree that it works - but is it inclined to leave a permanent oil mark on the paper. Not something I would either want or recommend.

There may well be other colored pencil solvents  sold throughout the world. Do let me know of any not listed and give details of known benefits and problems if you can.

A link to a useful article on using solvent is on the ZestIt  web site - http://www.zest-it.com/zest-it-pencil-blend.htm

There  are a number of other options for dissolving and moving the pigment about on the paper - quite apart from the obvious choice of water with water soluble pencils.

One of those I will briefly discuss is the Icarus Board.  This is manufactured in the USA and sold by developer, Ester Roi.

I have not tried this heated drawing board, but I have seen excellent results from those who have used it.  It melts the wax pencil pigment with a controlled heat.

Full details and a demonstration can be seen on their website.  The boards are despatched worldwide. Discounts are sometimes available to members of pencil groups such as CPAL Facebook group. The board is expensive - the smallest size is 14 inches x 20 inches working area and is priced around $270 plus shipping and Insurance.